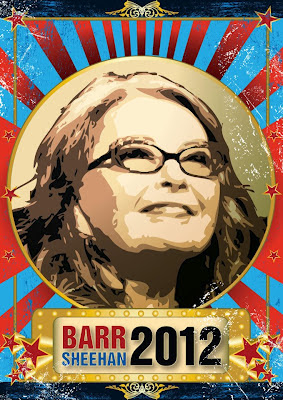 ROSEANNE BARR ANNOUNCES RUNNING MATE FOR PRESIDENTIAL CAMPAIGN
Roseanne Barr announced that Cindy Sheehan will be her running mate in her bid for the Peace and Freedom Party’s nomination for President. Sheehan is an anti-war activist who first gained national attention for her protest camp outside then-President Bush’s Texas ranch.

Former Georgia Congresswoman Cynthia McKinney, who has been working closely with Barr on this campaign, commented, “Access to the ballot is a civil rights issue that needs attention across the country. If voters only have two choices, both of which represent the same interests, then we don’t really have a democracy.” McKinney went on to describe a higher standard of democracy, “When I was in Congress, I promoted proportional representation for legislatures. This is the only way to make our democracy representative of the people, rather than the corporate donors.”

The Peace & Freedom Party nominating convention takes place on Saturday August 4th in Los Angeles. Cat Woods, an officer of the Peace & Freedom Party, echoed Barr on the party’s emphasis on ballot access. She said that the party hoped to “draw attention to the ongoing erosion of alternative parties’ access to the ballot and how this directly deprives voters of control of their government.”

When asked whether she supported the Barr ticket, Woods added, “Our party needs to reach a wider audience with its message of socialist solutions. Roseanne Barr and Cindy Sheehan can bring that.”
Responding to charges that she could “steal votes” from Obama or “spoil the election,” Barr said, “The American people are sick and tired of this ‘lesser evil’ garbage they get fed every election year. Both the Democrats and the Republicans do the same evils once they’re in office. I’m here to tell the voters: if you want to tell the government and the two domineering parties that you’re sick and tired of all their evil, register in the Peace and Freedom Party and vote for me and Cindy.”