Consitution? What Constitution? by Cindy Sheehan 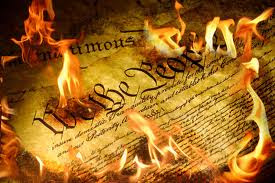 I know that the US Constitution is a deeply flawed document that only protected white male property owners when it was written and ratified a couple of centuries ago. Through hard fought struggles, men of color, then women were given the vote, but women are still not guaranteed equal protection under the law. However, since the USA PATRIOT ACT (Uniting and Strengthening America By Providing Appropriate Tools Required to Intercept and Obstruct Terrorism Act of 2001) and the psychotic War OF Terror, the Constitution and it's protections for we the people have become even more obsolete. After all, what did Bush call the Constitution? A "goddamn piece of paper?"

Every person who enlists in the Imperial Armed Services takes this oath, which is now just an exercise in..what? An exercise in the absurd, I think:
I, (NAME), do solemnly swear (or affirm) that I will support and defend the Constitution of the United States against all enemies, foreign and domestic; that I will bear true faith and allegiance to the same; and that I will obey the orders of the President of the United States and the orders of the officers appointed over me, according to regulations and the Uniform Code of Military Justice. So help me God.

The military has become, if it always wasn't, the supreme institution that sets fire to the Constitution every time it lands in another foreign country where presidents, not the Congress has sent it. The military regularly punishes people who do hold their oaths sacred, such as Bradley Manning, Camilo Mejia and other truth tellers and resisters, while allowing the real war criminals to escape punishment and flourish. I think there's a reason that "defend the Constitution of the United States against all enemies foreign and domestic; that I will bear truth faith and allegiance to the same" is put at the highest point in the oath because the president of the United States and the "officers appointed over me" have become the domestic enemies of the basic rule of law of the land.

Today, I, the mother of a troop killed in one of the deadly wars for Empire, am on a three month trip across the country riding my bike for peace and justice, and my crew and I are here in Maryland to try and support Bradley Manning. It hasn't been easy.

This past Wednesday, June 26th, the Tour de Peace van with all of our peace propaganda stuck to it, sailed through the visitor's check point and we stayed on post all day to go to the trial. We drove the van to the food court and back to the court martial without one problem.

Yesterday, I stayed at the place we are being hosted at because I had a bad headache, so our driver Malcolm went to Ft. Meade with another activist and was ushered in through the main gate. Malcolm is a vet, so he has a veteran's benefits card as well as a driver's license. The court martial went to a recess and Malcolm left to drive the other activist to a local bus station and when he went back to Ft. Meade he was stopped and prevented from entering because of this sign:

We drove up to the visitor's entrance and dutifully handed over ID and got out of the van to open all the doors and engine hood and some authority types walked over (one with his flashlight out ready to strike) and told us that we would have to empty the entire van so they could search the contents of a three month trip that included a lot of camping. Malcolm asked, "Cindy you want to go through all this?" I said, "Sure, the court martial will recess for lunch soon, we have lots of time," so I started hauling gear out.

That ploy from the military/security state was obviously a bluff because I be that they figured we wouldn't want to "go through" all that, so the highest ranking person said, "You have to remove the posters if you want to go in." We declined to have our 1st Amendment rights stomped on so rudely by people sworn to protect them, but I had some questions for the violators.

My first one was, "My son died in Iraq and you are telling me that his mother doesn't have her First Amendment right to freedom of speech and freedom of expression?" Mr. In-Charge said, indicating the public road (Maryland 175), "Sure, you have it out there, but this (pointing toward the post) is a federal installation." Of course, my follow up question was, "Isn't the Constitution a federal document?" No answer. I asked Mr. In-Charge why were allowed on before, and his answer was, "that was a mistake, you should never have been allowed to enter the post."

Then I asked if the soldiers, marines and ? (looked like Homeland Security) if it was true that they all had to take the above oath. I got a non-sequitur answer from a young marine: "Ma'am, I was blown up in Afghanistan to protect you." "Protect me! Do you think blocking me from exercising my rights is 'protecting' me?" His answer: "Yes, because there are some people on post who don't agree with you and you may be in danger." 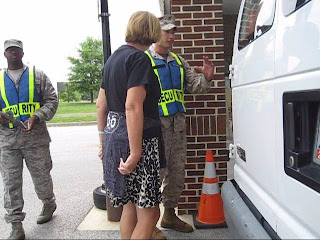 Talking to the blown up Marine

What does that above statement imply? PTSD? Brain-washing? Short fuses? All of the above? I informed him that we had already been on post with our van, with all the posters, etc, and didn't have a problem, but if he got "blown up" protecting me, then shouldn't he escort us on and off the post to ensure that our rights were protected and that we would be physically safe? At least his mother didn't have to bury him for lies, like I had to bury my son!

It reminds me of the time that I was in Oslo, Norway to help the movement there protest at the Nobel ceremony of Barack Obama. After I spoke at the rally in a public square, I was asked to go to the head of the march. While I was standing there waiting for the march to begin, a huge Norwegian cop strode up to me and I must have jumped a mile, because he asked me, "What's your problem?" Me: "Oh, usually when a cop walks up to me in the US, I am about to get arrested and probably roughed up a little." I will never forget his face, or his answer. "This isn't the US, I am here to protect you and protect your right to protest." And he did! Staying with me all the way to the end of the march. Fat chance of that happening in the US. Cops and the military exist here to protect the property and persons of the 1%.

I really didn't want to end up in the Ft. Meade gulag for any kind of indefinite detention, and there was a soldier/security agent standing about 10 feet away with a taser (I think--I am not an expert in weaponry, but I have seen enough hanging off the belts of cops) so I stood my ground, we stood our ground, as much as we could without crossing the line that would get us tased or detained. When we pulled around and were heading out toward the area where we could exercise our rights--not on a "federal installation" goddess forbid--Mr. In Charge walked over and gave us back our papers (driver's licenses) and I thanked him for seriously inhibiting our rights.

A) according to our host and dedicated Bradley Manning supporter here in Maryland, no car has ever been searched before ours.

B) if we were really going to cause trouble, or bring in a bomb, would we drive up in a van covered with anti-war and anti-empire propaganda? Or would we try to looks like war lovers like Barack Obama who has been out on his Tour de War?

C) we have something up our sleeves...stayed tuned. 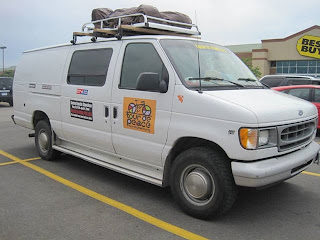 The Evil Van of Peace

"They searched me and my rental car totally on my first trip inside, because I had a Manning poster in the back seat...they looked under the hood, in the trunk, the glove box, under the car with mirrors, etc...they also forced me to prove it was my rental car with the Enterprise paperwork...I did like you did, telling them I was a service connected disabled veteran, and that they were violating my "Constitutional" rights. I also told them that they were insane."