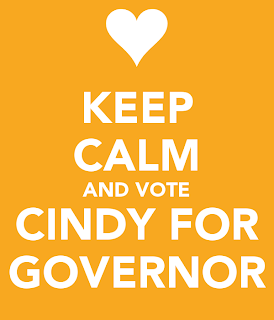 California Governor Jerry Brown is going around the world with one simple, yet profoundly wrong message, "California is Back." The problems with this statement is that it is false and that Jerry Brown is obviously out of touch with the people of the state that he "governs."

Despite the fact that California is only "back" for Brown's friends and cronies in such industries as Big Oil and Privatized Prisons, asked on NPR about the conundrum of Brown lying that California is back and the high poverty and jobless rates, Brown said the fault lies with, "So, yeah, it's (poverty) there, but it's really the flip side of California's incredible attractiveness and prosperity." Are you tired of constantly being on that "flip side?" Cindy Sheehan for Cal Gov wants California to be back for 100% of our population, not just Brown and his ilk. 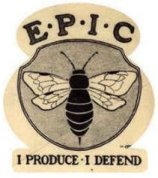 How can WE End Poverty In California? First, we must defeat the lies and propaganda of the two political parties that dominate the conversation. Ask yourself: How is MY economy? How am I doing? Has Brown's "plan" made me economically secure, or am I barely keeping my head above water in this rat-race struggle? If you feel increasingly left-out of the "incredible attactiveness and prosperity" of Brown's California, join me in our EPIC campaign for peace and prosperity for all.

Cindy Sheehan for Cal Gov would work with community councils on issues that every community tragically faces in Brown's economy, like the growing homeless population and cutback of mental and physical health services. Communities, using budget councils comprised of citizens will have wider latitude in planning their own budgets to meet the needs of the people who live (indoors and out) in our towns.

Recognizing that health care is a human right and not privilege for those 1% parasites, Cindy for Cal Gov calls for Medi-Cal for all--everyone in, no one out.

The income disparity that Brown cries huge crocodile tears over is due, in no small part, to the disparity of access to education. According to the California Budget Project, our state spends 60k per prisoner per year (how much of that really "trickles down" to each prisoner?) and less than 9k per year per k-12 student. California colleges and universities are pricing students of the 99% out of the right to a higher education. We call for a return to a system where pre-school to 12th grade is fully-funded and programs like art, music, drama, and sports (not just football) are available and free to all students. Where would the money come from? Release those 44% of prisoners that have been deemed to have zero chance of recidivism and end the practice of devoting millions of our state's precious dollars to prisons for profit like Correction's Corporation of America. California is near the bottom in measurable standards for education and, if this program is followed, we could be at the top again.

Energy production and control of natural resources is a huge issue. The exploration and extraction of fossil fuels is destroying the delicate balance of our eco-system and worker control is essential for safety and to make a quick transition from fossil fuels and nuclear power to cleaner and renewable sources of energy. No worker wants to be blown up at work, nor does he/she want the planet destroyed for his/her children or grandchildren.

Resources devoted to giving Big Oil tax breaks will be devoted to this transition AND to expanding low/no cost public transportation.

Last, but not least, healthy, organic and GMO-free, food production is essential to a healthy economy and healthy state. Monsanto and Big Agra have no place in our food-production and the land will be returned to the people and collectives for healthier production and more prosperity for our farmers.

The above is a thumbnail sketch of our EPIC campaign, and the campaign feels that a successful campaign is one where we hear from YOU and is diverse and energetic. This campaign is OUR campaign. Brown and the 1% cannot be defeated unless we work together.

Our campaign website is: www.Cindy2014.org and Cindy Sheehan can be reached at: Cindy@Cindy2014.org