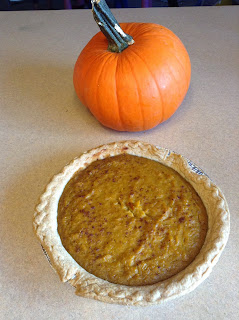 Some may know me as an anti-war activist who was “activated” after the murder (J’accuse l’empire) of my son Casey Sheehan in Iraq. Some may even know that I am a revolutionary that (among other things) advocates for a grassroots, peaceful revolution to wrest control from that empire to the people. How does “home cooking” jive with that?

In this nation of fast-foodaholics, I am into the “slow-food” movement and eating as close to the original food as possible. No processed/fast food shall cross my lips, mostly because it’s healthier, but partly because I don’t want my valuable cash money to go to support Monsanto, Big Ag, and Big Food Conglomerates.

I am also vegan, so I am constantly searching for yummy vegan alternatives to processed food that use animal products. To this end, I am happy to share my delicious vegan, organic recipe for Pumpkin Pie, a seasonal favorite.

Anyway, this is how: Choose an organic pie pumpkin (obtainable at Trader Joes). One is plenty for one pie—you may be able to stretch the pulp for two, or have some left over for custard.

Cut off the top of the pumpkin, as one would do if you were getting ready to carve it. (NOTE: We tried to grow our own pumpkins this season, but the blossoms did not get pollinated, unfortunately...)

Scoop out as much of the innards as possible, and set aside to pick out the seeds to roast in the oven. Cut the cleaned out pumpkin into smaller pieces and then clean the pumpkin detritus out further. (Oh, while you are doing all this, preheat your oven to 350).

Roast the pieces (skin down) on a shallow roasting pan at 350 for 55 minutes until the pieces are fork-tender. (No oil is needed for the roasting.) The above process is incredibly easy and fills your home with scrumptious smells.
Now it's easy to separate the pumpkin skin from the pulp. Do so, and put into a food processor or blender with about ½ cup of almond (or other alternative) milk.

Puree the pumpkin until smooth, leave about 2 ½ cups of the puree in the processor/blender, and then add:

Mix all together until smooth, pour into pie crust of your choice (or into a baking dish, sans crust) and bake at 350 for about 45 minutes (until knife inserted in middle comes out clean).

Let cool, then EAT IT!

Whip some coconut cream with cane sugar (or whatever sugar you use) for a delicious vegan topping.

Note: Libby’s, which has a corner on canned pumpkin pie filling market, is a division of Nestle. Among other evil things that Nestle does, a former CEO of one of the wealthiest corporations in the world, claims that access to water is NOT a human right. Make your own filling, it’s
Posted by Cindy Sheehan's Soapbox at 9:16:00 AM