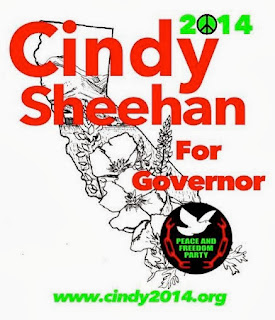 "Peace Mom," Cindy Sheehan of the Peace and Freedom Party has announced her intention to challenge Democratic Governor Jerry Brown for his office in the open June primaries.

From her home in Vacaville, Ca, Sheehan said, "Jerry Brown has had the temerity to proclaim that 'California is back.' I am a born and raised Californian and I know who the state is really 'back' for: Jerry Brown and his cronies in private education, private prisons, and big oil. The time is now for the 99% to take this state back for we the people."

Sheehan continued: "California is near the top (or at the top) of the nation for homelessness, for those incarcerated, for unemployment and near the bottom for measurable education standards. Against the wishes of his base, but in allegiance to his big donors in Big Oil, Governor Brown has opened more precious land for the disastrous process of hydro-fracturing. The social safety net is being tightened like a noose around the necks of vulnerable Californians, like the mentally ill, seniors and students and the situation gets worse at the hands of the Democrat and Republican politicians."

In 2008, Cindy Sheehan came in 2nd against then Speaker of the House Nancy Pelosi and the battle-cry of her campaign for June is: "Second place wins the Race." The Sheehan for Governor, 2014 Campaign is very optimistic that in June Cindy Sheehan will come in at least second and that will give the people of California a chance to learn of a Better Way for California.

"With the wonderful natural and financial resources of this State and with the energy of the people, we can End Poverty in California; clean and restore the environment; empty our prisons of non-violent offenders and dramatically increase funding and the quality of public education; house the homeless and feed the poor with healthy non-GMO foods. We have an ambitious program, but I will never, ever give up my struggle for peace and economic justice. I want people to support themselves, their families, their communities and their state by supporting and voting for me," Sheehan concluded.

The Sheehan campaign will kick off it's drive to collect 10,000 signatures by February 15th on December 27th when she picks up her papers from the Solano County Registrar of Voters.

Cindy Sheehan is a Vacaville resident whose oldest son Casey was killed in Iraq on 04 April, 2004 and has become an internationally known peace-activist, author, and podcast host.
www.CindySheehansSoapbox.com

For more info, contact Dede Miller and/or go to: www.Cindy2014.org 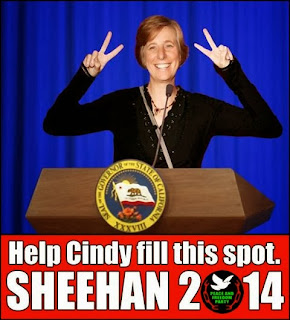