The Tragic Quest for Education by Cindy Sheehan 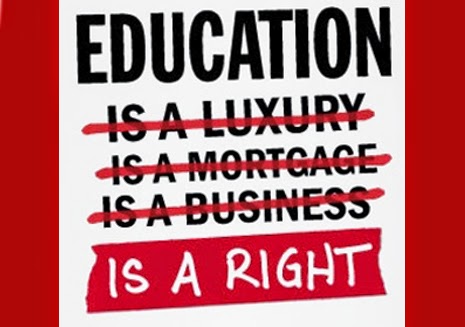 Read more at http://www.brainyquote.com/quotes/topics/topic_education.html#6P7TEbMhRZ3VcE82.99
"S(he) who opens a school door, closes a prison."
Victory Hugo
Article 26 of the UN Universal Declaration of Human Rights states that “education is a right.” While public education from K-12 is technically “free” in the United States, access to safe education of an acceptable “well-rounded” quality is essentially disappearing.

Of course many elementary, middle and high schools are being closed due to budgetary concerns and as I stated before, quality public education is hard to find and College and University in this nation are not even close to being “equally accessible.”

Most nations around this world have free, or highly subsidized universities, even in that “evil” Cuba. However, even our public institutions in the USA are becoming increasingly over-priced and with good jobs that have fair wages and decent benefits also disappearing, many of our young people are being forced to weigh the cost of education with will it be realistically “worth it?”

I have a tale of two young Americans from the working-class who dreamed of obtaining a University degree.

The first was a young man who always felt great responsibility to “do the right thing.” His parents sent him to Catholic School from K-8 and he was an Eagle Scout.

After graduating around the middle of his class in high school, he studied Theater Arts at a local community college for three years before he was able to complete his AA degree. He worked fulltime at a local department store and was active in his church whenever he had the time.

In his final semester of courses at the community college, a lying Army Recruiter preyed upon his trusting nature at a college “Job Fair.” Long story short, the young man was promised a college education and he enlisted in the Army in 2000 and was murdered in the illegal and immoral war in Iraq in April of 2004.

Our other young working-class American is a woman who did well in high school and on her SATs, but her family couldn’t afford to send her straight to university and she did not do well enough for many scholarships.

She struggled in community college because she also had to work fulltime as a food server to make ends meet.

She matriculated to a university after spending about eight years in a community college and within 4 years of that, she had completed not only her B.A., but obtained an M.A. as well.

The young lady did not join the military to do this, but she now has a lifelong debt of $50k. After all her hard work, what was her reward? She now works at two bars as a bartender. She jokes wryly, “I needed a Master’s degree to tend bar in San Francisco.”

Why is it that the children of the “99%” have to go into the military or onerous debt to obtain what most people/governments of the world consider a “human right?” It’s not right and a country that sends all good jobs with decent pay and benefits overseas, and fails to properly educate all of its young people cannot sustain itself for long.

The above examples come from my own family, my son Casey and my daughter Carly.

When I graduated from high school here in California in 1975, state colleges and university were free for residents. For an easy solution, this state needs to redirect some of the resources it uses to maintain a vast prison industrial complex and subsidies for big oil and other corporations back into education and other social services like housing, healthcare, healthy food and clean water.

It's not only possible it's historically accurate and urgently needed.

Cindy Sheehan is an internationally known peace and social justice activist who is currently running for Governor of California: www.Cindy2014.org