Take this Survey and Shove it by Cindy Sheehan


Take this Survey and SHOVE IT!
I ain’t votin’ for you no more!
Cindy Sheehan 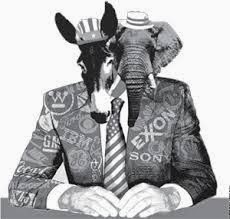 In 2007, to much hoopla and derision from what passes for the left in the USA, I publicly exited (Stage Far Left) the Democratic Party. So, imagine my surprise today when I got a letter from the Democratic National Committee (DNC) asking me “as a party leader” to participate in the Official 2015 Democratic Party Survey. I even have a “DNC MEMBERSHIP” number for cripessake!

When I say that I “left the party” in 2007, I did not leave as a party apparatchik, or anything approaching a “party leader.” At best, I had been a loyal Dem voter for the majority of my life, but I had never belonged to the DNC nor had I even ever contributed to any political campaign.

Before I get into the fluff of the survey (which has nothing about foreign policy/war/torture/CIA, because there is nothing there to distinguish the Dems from the Tea Party), for full disclosure, I have always loathed the GOP (I remember crying when Reagan won). However, when the GOP commits crimes, my thought is, “It is the Republicans, what else can we expect?” In 2007, I left the Democratic Party because it broke my heart and I stand on my principles and against the DNC to this very day.  At the time I publicly left, of course, the DNC was only being the DNC, and like any venomous snake, it will bite you to insert its poison. Good thing I jumped out in 2007 before it could do any more damage to me. Even though the difference between the DNC and GOP is negligible when it comes to war, when it comes to domestic policy, the differences seem to be purely rhetorical.

Now on to the fluff of the survey: My first instinct was to say “meat,” but there is no meat in the survey (fundraising scam).

The fundraising scam’s questions are set up in a way to be entirely vague and exploitative at the same time. These questions are professionally designed to inflame a visceral response to the Blue Choir and the chair of the DNC Debbie Wasserman-Schultz (D-Israel) knows that the base of the DNC not only cares about these issues, but wholly blames the Republicans just as they are supposed to.

We “party leaders” (shouldn’t one actually be registered in the party to be a “leader?) aren’t given any space to add our thoughts or concerns except for three tiny lines on the back.

The punch line to the entire survey is that I am not even an “official” “party leader” until I: “Complete Your DNC Contribution Form” and send a minimum of $25.

I am going to mail the survey back in the “enclosed postage paid envelope” with a copy of this article attached and without one thin dime. The DNC is lucky that I don't sue it for damages. I may tell them to go ahead and put this Fundraising Scam where the sun don’t shine, though.

Here are the questions and my responses:

1.   Do you agree with the President’s plan to take executive action on issues that Republicans refuse to bring to a vote, like, immigration action?

I am wondering what “executive action” Obama would take on “immigration?”  According to Pulitzer Prize Winning website PolitiFactCheck:

According to current figures from Immigration and Customs Enforcement -- the federal agency responsible for deportations -- Obama has removed 1.4 million people during his 42 months in office so far. Technically, that's fewer than under George W. Bush, whose cumulative total was 2 million. But Bush’s number covers eight full years, which doesn’t allow an apples-to-apples comparison.

If you instead compare the two presidents’ monthly averages, it works out to 32,886 for Obama and 20,964 for Bush, putting Obama clearly in the lead. Bill Clinton is far behind with 869,676 total and 9,059 per month. All previous occupants of the White House going back to 1892 fell well short of the level of the three most recent presidents. (Louis Jacobson August 10, 2012)

The inconvenient truth, though, is that Obama is even worse than Republicans on immigration. However, when it comes to taking “executive action” I opposed it when Bush did it and I still oppose it. The US is supposed to have a system of checks and balances and “executive actions” smack of treasonous behavior and illegal usurpation of power.

2.   Do you support the President’s plan to increase the minimum wage for American’s workers?

No, I am fundamentally against a minimum wage and $10.10/hr is so far below a living wage with dignity that it will keep millions of “American” workers and their families in poverty or barely scraping by. For example, according to a living wage in my county in California (Solano) is estimated to be $12.24/hour; in San Francisco County it’s $15.66/hour (according to Insight). This is the bare minimum wage for one adult and I doubt much dignity is conferred on a person who makes such low wages. Obama's "minimum wage" leaves a huge monthly gap and that's why I support a living wage based on many factors, including cost of living and cost of really living.

Also, if the US had a comprehensive single-payer healthcare system, then healthcare costs would be removed from the equation and people would have a more comfortable standard of living.

3.   Do you support the President’s plan to make it possible for more American workers to earn sick days and family leave?

Sick days and family leave should be mandatory and natural for EVERY worker on this planet. And, hey, while we are at it how about paid vacations? In my observation, most work these days is “casual” or “contracted” and I know very few people who actually have paid sick days or paid vacation.

In many “first” world countries, mothers get many months to several years of full or almost full pay when they have children. Here? Six weeks at low pay, if the mom is lucky. In a nation that bombs countries to spread its values, family sure seems like a low-priority to it. Six weeks? A woman who just gave birth has most likely not even stopped bleeding by then. I feel like all of Obama’s "grand" plans are just more stale bread crumbs to keep the flock from rebelling.

Also, when we are asked about "American" workers only, does that absolve the profiteers from paying even a low minimum wage of $10.10/hour (proposed) to their workers in other countries who are making their crappy products to be sold here in the US at Walmart? It's a rhetorical question, the answer is "yes." Also, how does fast-tracking the Trans-Pacific Partnership figure into this? I believe it has been shown that the TPP will have a negative affect on all workers.

4. Do you support President Obama’s plans to close the wage gap and make it possible for women to receive equal pay?

The only wages this would affect would be people who contract with the Federal Government. How about an Equal Rights Amendment to the Constitution that would finally mention women as equal to men? I don’t have faith in the Constitution or the ability of the elite to adhere to it, but for over two centuries ½ of the people in this country have been excluded.

5.   Do you support his plan to close other tax loopholes and to simplify the tax code so that corporations and the ultra-wealthy will pay their fair share?

Does the DNC mean the “ultra-rich” like a large majority of Congress? If “fair share” means enough of a tax to make the “ultra—rich” like the 99% rest of us (so we could be the 100%), then, yeah, I’d support it. If closing loopholes on Corporations means that all of the money that has been stolen from us via low wages, high prices, and government largess is returned to the public commons, then I’d say, “hell, yes!” However, as the health insurance companies wrote the “Affordable” Care Act, I am sure the ultra-rich corporations would write the new tax code with built-in new and improved loopholes.

6.   President Obama presented a plan that will allow American workers to gain the modern job skills necessary to compete in the global economy. Do you support these efforts?

I am not even sure what this means, but it sounds like something I should support and immediately send a minimum of $25 to insure the Democratic agenda moves forward.

7.   Do you support President Obama’s plan to reduce carbon pollution, accelerate the development of clean energy, reduce greenhouse gas emissions, and invest in sustainable and resilient infrastructure projects to prepare for the effects of climate change?

While the global oil cartels run US foreign policy, bombing and devastating oil rich countries, approving more offshore drilling leases, increasing nuclear power, increasing hydro-fracturing, letting Monsanto poison our water as well as our food, letting BP get away with ecocide in the Gulf of Mexico, letting big water steal our water and then charge us for it, allowing US corporations to operate in other countries without even the bare minimum of ecological protection?

I don’t support green Capitalism. Energy and energy production belongs in the hands of the workers and communities.

8.   The President has proposed a plan to provide a community college education to any American who is willing to work for it. Do you support this initiative?

Hell, no! Education is a human right and higher education should be free, high quality and accessible to EVERY PERSON that wants to use it. Paid job training, apprenticeship programs, internships, and certificate programs should be free for those who choose that path. Our young people already work their asses off to go to school only to get into lifelong, unrelenting debt. I would support a plan to forgive student debt (but Obama’s buddies at the banks wouldn’t like that) and make all education free. Most countries do this and here in California we did it until profit and privatization became the overwhelming goal of the parasites at the top.

Those are the questions. There is one odd part that asks me to choose three Republicans from a list of ten that may be the likely Republican nominee in 2016. I checked: Other: Hillary Clinton. I evaluated Clinton and she has all the desirable qualities of a Republican candidate for president. However, I am sure all of the evil clowns at the DNC will get behind her rightwing agenda, too.

In the tiny three-line space for any other comments I would like to make to the President or DNC, I wrote in all caps (in black ink as instructed. We are all conditioned well in this fill-in-the-bubble world):

WHY THE HELL DIDN’T YOU DO ANY OF THIS WHILE DEMS CONTROLLED EVERY BRANCH OF THE GOV’T IN '08-'10?
SOME OF US SEE ALL THE WAY THROUGH YOUR ROT.