"What is, Is." by Cindy Sheehan 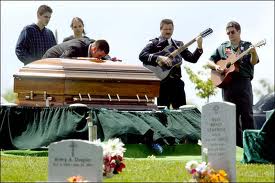 Even if I hadn't become an internationally (in)famous peace activist, I still never would have been the same after my oldest child, my son, Casey was killed in another Imperial war for profit and domination of natural resources.

If a person hasn't had the dreadful experience of being "regretfully" (yeah, right) informed that he/she has unnaturally outlived a child, I will try to explain it to you: it's like having your heart ripped out of your chest, spindled, mutilated, stomped on, yet, somehow, you survive that profound shock. As a mother, I can assure you, dear reader, that childdeath is far more painful than childbirth.

Anyway, I survived the initial shock and the numbness (and alcohol consumption) that got me through the first week: Casey's body being returned to us in the shipping department of United Airlines in a cardboard box. His funeral detail wasn't even there with us: he was picking up his rental car. I sat on the curb of the loading dock sobbing my eyes out while my oldest child, my love, was being treated like a box of whatever. There was no honor guard, but that is fitting because there is exactly no honor in dying for a bloodthirsty and greedy Empire.

The first year was the toughest for me. There were many times that I wanted to take the entire bottle of sleeping pills that an unenlightened MD had prescribed for me. The only thing preventing me during that darkest of times was my surviving children.

I heard many platitudes from well-meaning, but unintentionally cruel people. "He's in a better place." "You'll see him again." "Time heals all." And, my personal "favorite:" "At least he died doing what he loved." However, the only platitude that really spoke to me during that whole time was, "What is, is."

Because "what is, is" just says it all in three words. No matter how I raged against the fact that Casey was dead and no matter how I raged against the machine that killed him, we (not just I) existed in a certain reality: One where wars were (and still are) being fought; occupations were/are being courageously resisted, and sons and daughters were/are being killed, or maimed for life.

"What is, is" partially liberated me from the guilt and regrets I was having. As a human with memories and biological urges to protect my children, I can still look back and pick and choose the places I "went wrong" and long for an alternate reality where I made better choices and Casey was still alive. However, that is "stinkin' thinkin'" and an exercise in futility; "what is, is" forced me to look ahead and see what I could do to help others not have to go through what Casey and our family was/is going through.

I have heard from so many people around the world who positively affirm my work. Casey's sacrifice and my reaction to it have changed lives and, if Casey is dead and "what is, is," to me, helping others is our human duty and I feel satisfied that we did/are doing just that.

Now, our family has a new "what is, is" situation. My sister, best friend, and peace-partner, Dede Miller has Stage 4 metastatic breast cancer. I am her primary caregiver and, I don't mind saying (without going into too much detail), it's not that easy. Again, with human nature, we are flooded with platitudes (and much good advice) and with my human nature, I am looking back on the last many years when I tried to get Dede to make healthier lifestyle and dietary choices. I don't know if it would have prevented her cancer, but I know if she followed my pleadings, she would have been much stronger to fight it.

"What is, is" comes back to me, not "water under the bridge." Water is water and how do we know we aren't looking at the same water going under that same bridge? Simply put, now we are existing in a reality where Dede has cancer and where we are put into numerous situations on a daily basis that give us an opportunity to help others who don't have the same access to information and support that we have.

I have been able to share with other cancer patients about the effective (proven) alternative therapies and many times, sitting in an infusion center (chemo or Vitamin C) with others is like having a mini support group and many wonderful interactions have already occurred.

This past week when Dede was undergoing chemo, I walked into the infusion center and looked up and I saw two old friends that I used to go to church with here in Vacaville before Casey was killed. The man is retired military, so, through the grapevine, I had heard that he was extremely upset with my antiwar activism.

As soon as I saw "Bill and Judy," I rushed over and saw that they were sitting with their son and he had been recently diagnosed with liver cancer. We hugged and cried and I was able to give them information about "Radical Remission" and the phone number for our alternative doctor. At that moment, politics didn't matter. The current wars were even further away and we connected in a very real and human way. It was a terrible situation in which to have a reunion, but "what is, is," and I think we found healing and tapped into a universal love for family and each other. Maybe, we'll put on our gloves and spar about politics later, but there is a time for every purpose, turn, turn, turn.

Here I am getting all metaphysical and philosophical, but, cancer is about the most real sh#t we face. It must be dealt with, but one needs to find hope and peace of mind in the midst of each battle.

While dealing with the cancer and the cancer industrial complex is our current battle, it has also become another way for Dede and I to repay some "karmic" debt for being human, and to help others.

That's who we are; that's what we do.