Full disclosure: I hate guns; I always have—even before my oldest son was killed by a gun shot to the head in a foreign land that the US was/still is occupying. (By the way, Casey had a gun, armor, albeit inadequate, PLUS the First Cavalry, and he was still killed by a gun--interesting). However, with my increased knowledge of and dealings with the Empire of Death, my views have changed about the necessity of an armed citizenry. It frustrates me that anyone would think of giving up his/her human right to self defense to an entity that is mired in death and gore and has never exhibited any hesitation to commit murder on a massive scale.


After the recent mass shooting in Roseburg, OR, (as Ray Light shared in Issue #92 of the ROL, USA newsletter, 31% of mass shootings worldwide happen here in the US) the predictable blather became the recycled, boring, and ultimately useless “debate” about “gun control.” However, as profoundly devastating is that incident, I think the discussion needs to be around “War Control.” Besides saving millions of  lives (the Pentagon receives billions of your tax dollars and needs to be shoved over the Fiscal Cliff), pushing War Control could also save OUR Social Safety Nets: nets that are filled with holes and that the austerity of the 1% are trying to destroy all together.

I am personally not opposed to quick back ground checks and short waiting periods for gun ownership, but why is that restriction only placed on citizens? Here in Police State, USA there is also an epidemic of Killer Cops and I believe that any new applicant to any police force needs to be first subjected to the most stringent background and psychiatric screening AND, then, the hopeful cop would have to pass the screening of a citizens' personnel review board that is comprised of a diverse cross-section of community members before he/she is allowed to openly carry a weapon in society. Why are our police forces becoming so militarized anyway? Obviously, to protect the lives and interests of the 1%, and not us.


Besides the emotionally charged issue of gun control, why are few people making this point as Martin Luther King, Jr. did so eloquently in his Beyond Vietnam Speech exactly one year before he was assassinated: “The greatest purveyor of violence in the world today is my own government.”


Why, President Barack Obama even has his very own Kill List and an entire bloated military establishment to do his filthy murdering for him. In the mass killings that are becoming too frequent in the US we rightfully mourn the deaths of innocents, but in Yemen (and elsewhere), the ones killed in Obama’s drone attacks are called, “bug splat” by the drone pilots pulling the trigger thousands of miles away. Similarly,  while the mentally ill murderer of students at Umpqua Community College is correctly vilified and pitied, the baby-killer by proxy Obama is enthusiastically welcomed and celebrated almost everywhere he goes (except, ironically, in Roseburg OR, where a large contingent of citizens opposed his visit). I don't get it. 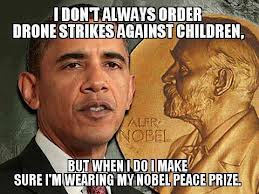 Presidents of the US are inherently the CEO’s of a huge war machine that has momentum on its own, but why does putting ones hand on a bible and swearing an oath confer respectability upon mass murder? Here’s an even stickier question? Why, in the eyes of some, is mass murder by, say, someone named George Bush (R) more horrendous than the slaughter by a couple named Barack Obama (D) or Bill Clinton (D)? I obviously think any murderer is a low-life scum and wearing an expensive suit and tie and traveling with ones own squad of heavily armed goons does not give legitimacy to murdering the innocent.


After the mass murder in Roseburg, OR, it was proven that the US intentionally bombed a hospital in Kunduz, Afghanistan that killed dozens. The hospital was staffed by Doctors Without Borders and exposes the heartlessness of Empire ("oops, sorry") and not so coincidentally Obama also announced that troops were staying in Afghanistan indefinitely in that manifestation of the US policy of never-ending war. Then Obama took his blood-soaked hands to Roseburg to "comfort" (read, "politicize the tragedy") some of the families of the victims and survivors.

Obama is paid very well to be the front-man for Murder INC, USA and making tragedies in places like Roseburg and Kunduz seem like aberrations and not an inevitable by-product of the deeply seeded violence that has infested the US since before it was the US is part of the job description. "Working together" to make sure tragedies like Roseburg "won't happen again," wouldn't be effective, even if Obama was serious about ending the epidemic of Killer Cops and mentally disturbed mass killers.

I used to live near Los Angeles where the LAPD regularly conducted gun "turn-ins." Private citizens bring in guns with no questions asked and then receive a grocery gift card depending on the value of the weapon. That's also a great strategy for War Control and I propose we pay the war machine NOT to produce implements of death and to go away and just leave the world alone.

If owning a gun is wrong for Joe NRA or Ché Revolutionary, then it’s wrong for Officer Not-So-Friendly.

If killing is wrong for me, then it’s wrong for Obama and the Empire.

I dream of (and work really hard for) the day when War Control is a reality and our priorities honor the beating of every living heart while we watch the deadly tools of war rust, breakdown, and return to the soil.
Posted by Cindy Sheehan's Soapbox at 3:03:00 PM