What if I told you disorderly conduct could change the world? | Mickey Z. 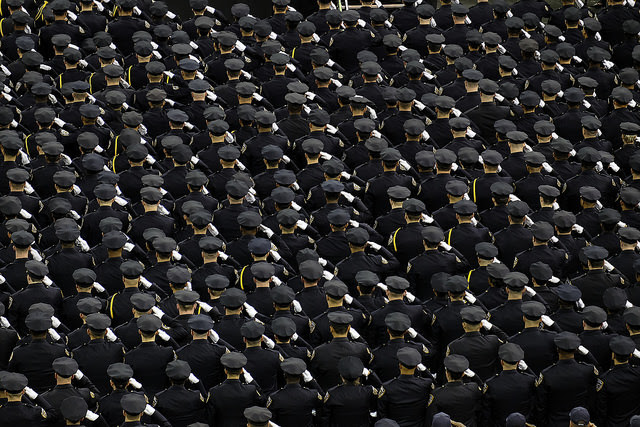 When the Blue Bloc goes on an arrest binge at a protest or rally, the ostensible reasons may range from trespassing to carrying illegal signs to wearing masks to blocking pedestrian traffic. However, the most common rap remains that old standby: disorderly conduct.
In other words, it's illegal to not conduct oneself in an orderly fashion.

But who exactly is discerning order from disorder in the Home of the Brave™? On the streets, it's typically that militarized gang wearing blue. The unarmed folks calling for justice? They have no virtually say in deciding how order is defined. Which, I submit, leaves us with no other choice than to embrace disorder.

“In chaos, there is fertility.” (Anais Nin)

What the elites call "order" is threatening all life on the planet and thus requires the rest of us to embrace militant noncompliance… pronto. Orderly conduct is what got us into this mess and is not going to suddenly stop the top 1% from sabotaging the future. That, my friends, requires the cultivation of chaos.

Those of you who know me personally are likely smirking right now as I will -- every now and then -- exhibit a penchant for precision… and um, a little over-analysis (on rare occasions). But paradoxically, my heart never fails to skip a beat when I hear the Situationists bellow: "Trade your boredom for chaos."

“I accept chaos, I'm not sure whether it accepts me.” (Bob Dylan)

During my public talks over the years, I've occasionally presented this bit:

"How many of you think the planet is in peril?" (Everyone raises his or her hand)

"How many think those in power -- those most responsible for putting the planet in peril -- will voluntarily relinquish that power any time soon?" (No one raises hand)

At this point, I deliver the predictable punchline: "So, if most of us think the planet is in peril but also believe the elites are not going to surrender their power, I have one more question: How much more are we willing to tolerate before we finally get serious about creating change?"

If “order” has brought us to the precipice and we all know it, what do we have to lose by trying disorder?

"In all chaos, there is a cosmos. In all disorder, a secret order." (Carl Jung)

Okay, I just re-read what I've written for this article so far and goddamn, I’m so tempted to edit it and make it more, um… orderly. But I won't. Instead, I'll just remind you that the defenders of order love nothing more than we embrace their Machiavellian methodology.

Revolutionary change is not based on order. Experimenting with alternate models of human culture is chaotic work, dismantling patriarchy, white supremacy, and capitalism isn’t a linear process, protecting our shared future is an evolving and messy journey, and recognizing that the dominant culture is "out of order" and must be taken down is where and how it all begins.

“Invention, it must be humbly admitted, does not consist in creating out of void but out of chaos.” (Mary Shelley)

Oh, how many times I've heard the misguided Gandhi quote about "becoming the change" bandied about in so-called activist circles throughout my so-called activist life. I say, if we’re gonna look inward before banding together to make much more than ego-soothing personal changes, it's high time we move past the Gandhi facade and try this: Become the disorder you wish to see in the world!
Destroy the present, become the future.

"What if I told you disorderly conduct could change the world?" by Mickey Z. is licensed under a Creative Commons Attribution-ShareAlike 4.0 International License.
Based on a work at http://worldnewstrust.com/what-if-i-told-you-disorderly-conduct-cou
Posted by Cindy Sheehan's Soapbox at 9:11:00 AM