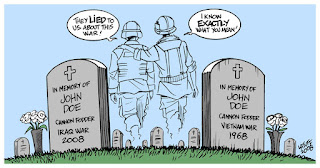 The rise of citizen concern about armed conflict in regions like Syria and Crimea makes the 2016 global spotlight shine a little less brightly on Iraq.

In the face of pressing global challenges, like the massive refugee crisis spurred by the protracted Syrian conflict, it is all too easy to overlook the estimated 4,497 deaths and 32,021 injuries of U.S. soldiers in the Iraq War. This loss is compounded by the estimated 500,000 Iraqi fatalities attributed to the U.S. invasion, further imploring a moment of nationwide introspection about the consequences of armed conflict.

When studying lessons learned from the Iraq War, and how these lessons can help mitigate future conflict, it is important to begin by understanding that reading about massive war stats continually fails to capture the magnitude of lives lost. How can anyone possibly measure the cumulative hopes and dreams of approximately 505,000 souls?

While we cannot answer this unanswerable question, we can tell that April 4, 2016 marked the twelfth anniversary of Casey Sheehan’s passing, one of the 4,497 U.S. soldiers that lost their life in Iraq. Casey would be 36 if he were alive today. His chance to raise a family, volunteer with the Boy Scouts and church that he loved, and celebrate Mother’s Day with his family was cut tragically short.

In remembering Casey, we also remember the chorus of global citizens who urged world officials to never initiate the Iraq War in the first place. In one of the world’s largest coordinated protests, an estimated 10-15 million citizens gathered around the world in 2003 to decry the onset of the Iraq War and warn elected officials about the cost of conflict.

Citizen protests continued throughout the Iraq War, and as much as 69% of the American population grew to oppose it. With the battlefields of Iraq still smoldering, armed conflict throughout the world is increasing rather than contracting. According to United Nations reports, armed conflict is on the rise. Over the last decade, 35 countries experienced armed conflict.

As disparate as present-day international conflicts may seem, many can be traced to nation’s seemingly insatiable appetite for natural resources. For example, a maritime zone with underwater oil resources estimated to be worth trillions of dollars is right off the Crimea coast (ergo, Russia invasion). Experts estimate that there are troves of valuable mineral resources under the South China Sea floor (ergo, China’s aggressive territorial claims).

This ravenous pursuit of natural resources seems to be fueled not only be necessity, but also by greed. Since the U.S. invasion of Iraq, Halliburton, a Fortune 500 company, has received $39.5 billion in Iraq-related contracts (including one no-bid contract for over $500 million). As you may recall, Dick Cheney served as the CEO of Halliburton from 1995-2000 prior to serving as Vice President from 2001-2009. As you may also recall, Vice President Cheney was an ardent proponent for the U.S. invasion of Iraq.

We do not highlight world officials’ unquenchable thirst for natural resources simply to demonstrate the hand of greed in modern warfare, but more, to issue a warning about the implications that these exploits hold for our future. Experts warn that human-caused climate change can cause rates of armed conflict to increase by as much as 50% as a result of changing temperatures and precipitation levels.

Alarmingly, recent episodes of armed conflicts have also been linked to climate change impacts. For example, the scarcity of resources in Sudan (triggered by desertification) helped precipitate a prolonged civil war and massive waves of refugees.

While increasing desertification and rising sea levels will bring us physically closer together than ever before, does the disappearance of conventional natural resources have to lead to global strife or can it spark collaborative problem solving?

In answer to this question, proponents for an eco-friendly and peaceful future recently celebrated a landmark energy accomplishment. As of April 2016, we reached over one million solar installations in the U.S., a step toward solving climate change and mitigating the need for fossil fuel conflicts.

Compare this progress to 2004, the same year that Casey lost his life on the battlefields of Iraq. Then, only 15,500 U.S. households were equipped with solar systems. While we applaud our progress toward a more sustainable future and continue to honor Iraq War veterans, citizens should not overlook the greed that continues to threaten global stability.

Millions of global citizens demonstrated in 2003 to rebel against the hand of greed in modern warfare. In the face of human-caused climate change and the societal changes that it promises to trigger, this same amount of citizen vigilance grows increasingly important today in order to transition to a greener and safer world.

Sources are listed in the same order that facts and stats are cited in the blog post.


Cindy Sheehan, Editor in Chief of The Soapbox, received international attention for her role as “peace mom” during protests against the Iraq War. She is the mother of Army Specialist Casey Sheehan, who was killed in action while serving in the Iraq War.

B is the anonymous author of A Rebel’s Handbook. A Rebel’s Handbook is a New York City-based initiative to equip citizens from all corners of the world with a playbook for progress and an antidote to injustice.