Either they will give us the government or we shall take it' | Mickey Z. 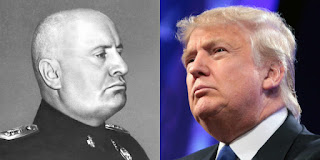 “Fascism should more appropriately be called Corporatism because it is a merger of state and corporate power.” Benito Amilcare Andrea Mussolini may or may not have said this, but there’s no doubt he lived it and imposed it and continues to influence many of us because of it.
Exploiting the fears of an anti-communist ruling class in Italy, Il Duce (“the leader”) installed himself as head of the single-party fascist state in 1925 after declaring three years earlier that, “either they will give us the government or we shall take it by descending on Rome.” Virulently anti-communist, anti-Semitic, and anti-labor, Mussolini was prone to pronouncements like this: “We stand for a new principle in the world. We stand for the sheer, categorical, definitive antithesis to the world of democracy.”

Putting this doctrine into action, Il Duce took aim at Italy’s labor unions. The result, says author Michael Parenti, was to “smash their unions, political organizations, and civil liberties.” This included the destruction of labor halls and the shutting down of opposition newspapers.

“In the name of saving society from the Red Menace,” Parenti explains, unions and strikes were outlawed in Italy (and in Hitler’s Germany, too). “Union property and farm collectives were confiscated and handed over to rich private owners.”

Even child labor was reintroduced in Mussolini’s Italy.

Despite or perhaps because of the Blackshirts, the terror tactics, the smashing of democratic institutions, and the blatant fascist posturing, Mussolini received some rave reviews on both sides of the Atlantic.

“It is easy to mistake, in times of political turmoil, the words of a disciplinarian for those of a dictator. Mussolini is a severe disciplinarian, but no dictator.” wrote New York Times senior foreign correspondent, Walter Littlefield, in 1922. Further serving the corporate roots of the U.S. media, Littlefield went on to advise that “if the Italian people are wise, they will accept the Fascismo, and by accepting [they will] gain the power to regulate and control it.”

Six days earlier, an unsigned Times editorial observed that “in Italy as everywhere else, the great complaint against democracy is its inefficiency…Dr. Mussolini’s experiment will perhaps tells us something more about the possibilities of oligarchic administration.”

In January 1927, Winston Churchill wrote to Il Duce, gushing: “If I had been an Italian, I am sure I would have been entirely with you from the beginning to the end of your victorious struggle against the bestial appetites and passions of Leninism.” Even after the advent of war, Churchill still found room in his heart for the Italian dictator, explaining to Parliament in 1940: “I do not deny that he is a very great man but he became a criminal when he attacked England.”

Other unabashed apologists for Dr. Mussolini included:
Support from a “higher source” was provided by the ultraconservative Pope Pius XI who shared Mussolini’s Bolshevik paranoia. In exchange for Fascist recognition of the independence of Vatican City, the pope bestowed his blessing upon Il Duce’s invasion of Ethiopia and his intervention in the Spanish Civil War. Even after Italy had aligned itself with Nazi Germany, the papacy never broke with either Fascist regime.

Finally, for support from the highest of all sources, there was FDR himself who, well into the 1930s, was “deeply impressed” with Benito Mussolini and referred to the Italian ruler as that “admirable Italian gentleman.”

Coda
Either Hillary Clinton or Donald Trump is going to be elected U.S. president this November. As distasteful as this is to accept, the choice is real: Obama’s third term or Mussolini’s second?
Take-home message: Mock and downplay Trumpism at your own peril.
Mickey Z. can be found here.

'Either they will give us the government or we shall take it' by Mickey Z. is licensed under a Creative Commons Attribution-ShareAlike 4.0 International License.
Based on a work at http://worldnewstrust.com/either-they-will-give-us-the-government-or-we-shall-take-it-mickey-z.
Posted by Cindy Sheehan's Soapbox at 2:42:00 PM