The Mistress of Mayhem by Anthony Freda

Why do people continue to support Hillary Clinton?
Maybe a steady diet of propaganda and lies from Clinton operatives posing as journalists like George Stephanopoulis have warped their perception of reality.

Maybe they are unaware of her well documented record of corruption, lies, failure and mass death.

Maybe they need to be reminded of the following facts:

Hillary enthusiastically promoted the lies that provided the pretexts to the Iraq War and voted for the invasion. She later said she was fooled by George Bush into voting for the

war. So by her own admission, she is dumber than W. Or, she is a mendacious war criminal who lied about why she sent American kids to die. Take your pick.
Hillary has accepted massive bribes in the form of speaking fees from financial organizations, dictators and corporations.  She is under investigation for misuse of classified
data, an offense for which she believes Snowden should be arrested.
Why don't her supporters care about the tens of thousands she killed in Libya, her creation of a failed Libyan state that is today a major
source of terrorist jihadists, or the Benghazi controversy? Do they know that as Secretary of State she arranged favors for foreign tyrants in exchange for
donations to the Clinton foundation?
Her criminal exploits include Whitewater, Travelgate, Filegate and more. Diana Johnstone’s book, Queen of Chaos,
describes Hillary Clinton as “the top salesperson for the ruling oligarchy.”

Hillary personally waged war on the women who were raped by her husband Bill, in an effort to discredit them.

Hillary helped diminish all of our rights and build a police state by voting for The Patriot Act.

Hillary helped pave the way for the big banks to criminally destroy economies via sanctioned greed and corruption.
Hillary Clinton is a spokesperson for the Wall Street criminals, the military-security complex, and the Israel Lobby.  She will represent their interests, not
those of the American people.

A vote for Hillary is an endorsement of the Iraq War, the police state and systematic corruption.

Sadly, despite her obviously immoral and criminal past, her coronation may be inevitable.
Hillary is currently stealing the nomination from Bernie Sanders and no one seems to care enough to point out that she is breaking the law.

The odds are against us, but we still have a chance to stop her by exposing her disastrous legacy.

Her supporters are victims of decades of deception and disinformation designed to manufacture their consent to her agenda of endless war and tyranny.

Perhaps the truth will set them free. 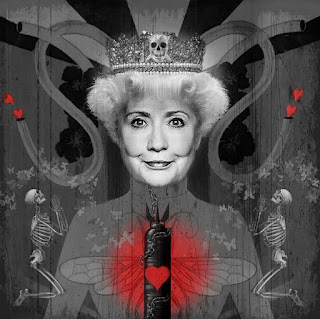