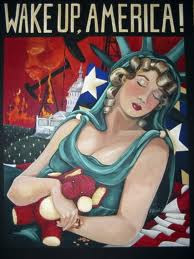 Prelude: Pre- Candidate "A" floats the electoral air-biscuit of a possible quest for the nomination of their (in the interest of not typing "his/her" I will use the vague, "their") political party: let's go with the Dems for the purpose of this piece.

The Anticipatory Interlude: The liberal Democrats who have felt increasingly at odds with the war president, but similarly not with the war party, grow ecstatic and social media is all a-twiiter (pun intended) with memes and petitions glorifying Candidate A's progressive qualifications to make a run and form a "political revolution." ("There's nothing new under the sun.") An exploratory committee is formed and the most crucial fundraising ability and online link is put into place.

The Play's the Thing: After much anticipation and angst, Candidate A announces their intention to run for the nomination and the social interwebs go into paroxysm of orgasmic joy and the donations roll into Candidate A's coffers by the millions. Candidate A must be viable, right? They are receiving so much money and literally thousands of memes have been produced.

(Tension arrives) Oh, jeez, here they come: the Predictable Purists who in true spoil-sport fashion point out the flaws in Candidate A, which are huge, but must be false, because didn't the Predictable Purist see the meme that touted the peace credentials of Candidate A? Why do these Negative Nancy's and Pessimistic Pete's have to be so dad-gummed inflexible--can't they see Candidate A only is saying certain things to get the nomination and once A wins, they will do the right thing that's been in their hearts all along, no matter how Sanders, (oops, I mean A) voted in a couple of decades of political life?

Gosh, then comes the actual primaries and for the first time in recorded history there is massive voter fraud in the states where A loses, but, naturally, no fraud where A wins.

Even though A's revolution is the acceptable kind with promises that can never be kept in real life, Negative Nancy admits that A ran the hardest race they could without actually challenging the establishment's choice in any kind of constructively hard way. Even though A's "revolutionaries" claim that he has "class," Negative Nancy and Pessimistic Pete really know that he lacks political courage, or even the will to truly challenge the Empire. So, by California's primary in June, A and company are the only ones that don't know A is finished.

Dramedy's Ending: A makes a dramatic speech in prime-time where A promises to "fight for the people" all the way to the DNC convention where A has already promised to capitulate and collaborate with A's (pretend) enemy. It would be Ready for Prime Time Comedy, if it weren't so scary.

A's followers go into paroxysms of grief and rage for about 48 hours all over the social interwebs and then most will fall in behind their "Castro of Capital Hill" and dutifully vote for the candidate of Wall Street and the War Machine because who the hell do Nancy  and Pete want to win, anyway, the Republican?

Vote, rinse, repeat; and the beat goes on.