Killary vs. the World by Anthony Freda 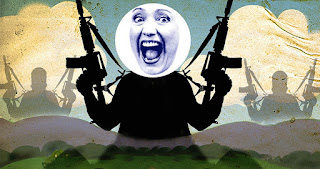 Watching the mainstream media working with the Clinton campaign to promote her discredited talking points and her mendacious "Fact checks" is watching the end of the fourth estate, and the end of a free republic.

Hillary and a complicit media have run the dirtiest campaign in modern history, but that is not the worst of their crimes.

They have successfully launched the broken coalition strategy and by releasing tawdry sex tapes they are attempting to neutralize attacks against them in that category.

A classic Machiavellian move is to charge your opponent with the very crimes you are guilty of.

It is a known fact that Bill Clinton is a violent, serial rapist and that Hillary threatens his victims and that she laughed about preventing a child rapist from receiving justice.

Disgraceful and repulsive, yes, but ultimately trivial in the big picture. The true crimes of Clinton include lying us into the Iraq War and spearheading the destruction of Libya, a murderous disaster.

Her policies have lead to the slaughter and displacement of millions, the empowerment of ISIS and the installation of a Sharia regime in Libya. Why do her supporters forgive her crimes against humanity?

Even if you believe the excuse that she made a mistake, why would you vote for someone who makes blunders so enormous they result in global mayhem and wholesale murder?

The psychopaths who currently run the world are preparing nuclear armageddon and our pathetic media is obsessing over meaningless sex scandals.

They are failing humanity once again. The sex distractions are only relevant because they reveal how sick our society is and how deviant our "leaders" are.

The country is hypocritically and selectively "shaken to its core" by sexual vulgarity, but does not care about war crimes or the unparalleled level of Clinton's corruption.

Wikileaks is exposing in hacked emails on a daily basis the disdain Hillary holds for her supporters and the truth.

They are revealing the disgusting details of the Clintonian pay-for-play model of statesmanship, and their collusion with the mainstream media to destroy Bernie Sanders and deceive the public.

But you won't hear stories about the fact that Bill Clinton got a million dollar birthday present from Qatar to grease the way for shady business deals in Haiti on the corporate news.

You won't hear about the backroom deals Hillary made with Goldman Sachs in exchange for millions of dollars in "speaking fees" either.

You will hear every vulgar detail of Gropegate, however.

The mainstream media cannot tell you the truth because they would be forced to expose their own collusion with the Clintons if they reported the Wikileaks bombshells.

The danger of having a media that is not working to reveal the crimes of a presidential candidate, but working to protect them is obvious.

They helped her promote the lies that took us to Iraq and ruined Libya and they continue to obfuscate her sins with lies of omission.

What will prevent them from helping her achieve her stated goal of war with Syria, which most military analysts say means nuclear war with Russia?

You know, World War 3? Hillary has vowed to destroy alternative right media in a flagrant contempt for freedom of speech.

Will she attempt to purge the alt-left media as well?

The Clinton machine has been effectively executing a coup at Fox aimed at replacing any critics with groveling propagandists.

Who will her followers and fawning media blame for all the ills of the world once their whipping boy Trump is gone?

Putin and Assad seem to be the new boogiemen. The problem is that they cannot be wiped away with smear campaigns and weaponized media. Their removal will require actual nuclear weapons.

The mainstream media has proven they will cheerlead her efforts to bring us to war and defend her crimes. They promote her "public" stance and bury her "private" stance.

Once she has succeeded in destroying all opposing media, it will be nearly impossible to hold her accountable for her crimes and to challenge her lies.