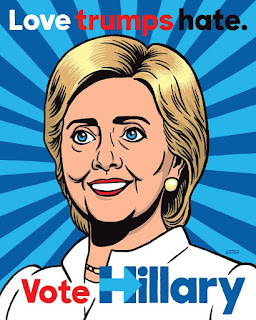 Journalism is printing what someone else does not want printed: ... everything else is public relations."
― George Orwell.

Good political art punches up and fearlessly exposes the sins of the criminal elite even at the risk of retribution against the artist.

Re-enforcing official party narratives is what propagandists do. Challenging them is what political art is supposed to do.

When you create art that glorifies a corrupt establishment politician, you are no different than the artists employed by fascists and dictators in the 20th century.
You become a tool of the state speaking lies for the powerful, instead of speaking truth to power.

Shepard Fairey, the artist who created the iconic fascist-inspired Hope poster for Obama has expressed regrets about the illustration because Obama has not lived up to his campaign promises. Exactly why you don't do it.

I am seeing a disturbing trend in political art coming from purportedly progressive artists. There are beautiful visual hagiographies of Obama and Hillary being churned out by some of the best illustrators working today.

Some of these works are even more obsequious than the legendary "Hope" image. I know these artists mean well and see themselves as champions of just and righteous leaders.

They are falling into propaganda. When we do so, we become complicit in the crimes of the establishment.

This portrait of a glowing Hillary brings to mind the smiling Chairman Mao pictures painted by slaves of the Chinese Communist Party. Is this an endorsement of her legacy of failed wars, chaos, and corruption?

There is not a hint of irony or balance to the piece. It is an advertisement for the queen of the oligarchy. The tagline "Love trumps hate" is a campaign talking point the artist has regurgitated on to his illustration. The line is as vapid and hollow as the eyes of his subject in the piece.

Love of what? War? Tyranny? Money? Power? This woman promoted the lies that took us to war in Iraq, stole the nomination from Sanders and Wikileaks is exposing her as corrupt and disdainful of the public.

Ward Sutton has created an outstanding body of work in his career as a political cartoonist. He is a talented artist who has valiantly chronicled the evil exploits of the Republican crime syndicate and I applaud him for his efforts.

This is not an attack on Ward. I like Ward. This is not me perched on my high-horse judging other artists. My works are nothing but filthy rags, but those rags will never be used in the service of war criminals.

I can only "hope" this is not the kind of "hard-hitting" political art we can expect to see in the age of Hillary.

The mainstream media has abandoned any pretense of decency and objective reportage. They work to promote the interests of their corporate sponsors and are infested with political operatives posing as journalists.

Artists and alternative media are our last line of defense against an onslaught of officially sanctioned dis-information.

Presidents have the bully pulpit and a compliant media to promote their narratives.

It is incumbent on artists to investigate and question the validity and morality of their positions, not act as amplifiers.


Anthony Freda
www.AnthonyFreda.com
Posted by Cindy Sheehan's Soapbox at 8:21:00 AM