CLICK HERE TO LISTEN TO THE VERY
INFORMATIVE SHOW

Even though I feel like I have much to be thankful for: my family, friends, supporters, good health, and energy; I recognize that the holiday of ThankStealing should be no day of celebration, but one of mourning for the genocide of the indigenous population of the Americas.

Today, several centuries after the first "Thanksgiving," the US, which has a long and sordid history of dirty-dealings with the sovereign nations of tribal peoples, is sitting idly by while the police state is attacking the water protectors of the Standing Rock Sioux and their supporters and allies. Water and sound cannons along with concussion grenades and other "non" lethal means are being deployed against people in favor of corporations that are compromising the future of our children and planet.

I majored in US history and I had a professor for a few of my lower-division classes that always stressed that there was not one treaty that the US made with Indian tribes that was not violated, and not after being pushed on to smaller and less desirable locations, the US Corporate State won't even allow the people to live in peace and free from toxicity and poison.

This ThankStealing Day, I remember and honor those people who are fighting for their very lives and peace in North Dakota.

Recently in North Dakota, a young woman from NYC named Sophia Wilansky had one of her arms blown to pieces by a concussion grenade SHOT at her by a class-enemy of the people in North Dakota. Sophia was there to support the actions and was passing out water at the time. (Read an article about it here).

Lame-duck Obama pardons a turkey at the White House while goons are attacking protesters and Imperial thugs are oppressing and murdering people all over the world. The people need a pardon (and a permanent break) from violence and oppression by the US Empire.

I reflect that it really isn't about Obama, or Trump, or Clinton, but about a long history of oppression and the need of the people to rise up against it: not just against one part of it, or a piece of it, BUT THE ENTIRE thing, if we want real change.

I am sending the money that I am saving on NOT buying a Turkey or going shopping on Black Friday, and sending it to the camps at Standing Rock.

This is how you can help, too!

Read the text of the proclamation by Wamsutta of the Wampanoagan on the occasion of the first Plymouth Day of Mourning on Thanksgiving 1979. 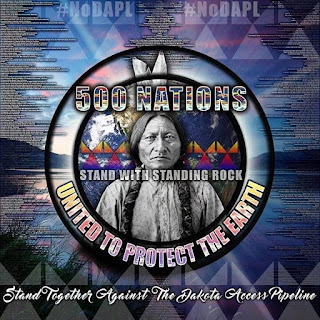