The Soapbox Presents The People Speak with Cindy Sheehan

Mike Whitney is a landscape contractor who veered into journalism following the attacks of September 11. He is a Project Censored award winner who writes on foreign policy, domestic politics and the economy. His articles can found at Counterpunch or the Unz Review.

Hopeless: Barack Obama and the Politics of Illusion
Jeffrey St. Clair (editor), Joshua Frank (editor)
The election of Barack Obama sparked long-dormant tingles of optimism in even the most entrenched political cynics. But the promise of an Obama revolution fizzled out even before his inauguration, as the president-in-waiting stocked his cabinet with corporate hacks, cut secret deals with Wall Street titans and plotted a bloody escalation of the senseless war in Afghanistan. Here is a scathing indictment of the Obama presidency from the best writers on the American Left. Hopeless is a view of Obama's policies from the trenches: the compromises, the backstabbing, the same old imperial ambitions. From Obama's sell-outs to big oil and the nuclear industry to his continuation of savage Bush-era policies in the CIA's global network of secret prisons, this fast-paced chronicle will outrage the politically naive, delight the critical and inspire those looking for an alternative to the dismal politics of lesser evilism. As Emma Goldman famously quipped, "If voting changed anything, they'd make it illegal." Let this book stand as a painful reminder to those who think anything less than social struggle will net tangible gain.
Contributors include: Mike Whitney, Kevin Alexander Gray, Jeremy Scahill, Joe Bageant, Marjorie Cohn, Brian Tokar, Linn Washington, Jr., Ronnie Cummins, Kathy Kelly, Tariq Ali, Ralph Nader, and more. 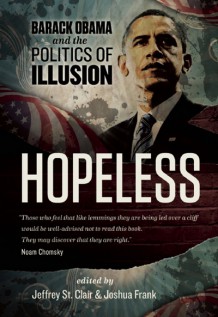