VENEZUELA MUST BE RESPECTED from International Committee for Peace, Justice and Dignity 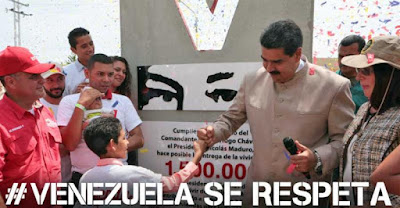 The International Committee for Peace, Justice and Dignity categorically rejects the interventionist report from Luis Almagro, General Secretary of the Organizations of American States (OAS), against Bolivarian Venezuela and the legitimate government of President Nicolas Maduro.

We repudiate Almagro's disregard of the will for sovereignty of the people of Latin America. Far from representing them, he only serves to undermine their independence. The people of the region ended colonization more than two centuries ago and have no intention of going back. Almagro has become a sad puppet for the interests of the Empire. We do not recognize his political and moral authority to judge the self-determination processes of Latin America. His arrogance and lack of respect is only leading towards intervention and a dangerous confrontation.

If he was left with just one iota of shame as a Latin-American Mr. Almagro should resign his post before the judgment of the people of the Americas descends on him; by then it will be too late.

Since its foundation the OAS has a sad history of being subservient to the designs of Washington, with its interventions and coups.

The people of the world remember the role of the OAS in the 20th century that continues in this century resulting in the deaths of hundreds of thousands in  Brazil, Guatemala, Dominican Republic, Cuba, Grenada, Honduras, Chile, Nicaragua, Haiti - these people will never be forgotten.  It is now  Bolivarian Venezuela turn to be humiliated by the OAS by pushing it back into the worst years of its history.

We issue this call to express our deep rejection of his plans and we unconditionally stand in solidarity with the people of Venezuela, its dignified Foreign Minister Delcy Rodriguez and its President Nicolas Maduro.

The people of Latin America demand peace with justice and dignity, and respect that Latin America has been proclaimed a Zone of Peace by the nations of CELAC.

The Bolivarian Republic of Venezuela wishes to express its unreserved rejection of the illegitimate and illicit report about Venezuela presented by Mr Luis Almagro, who acts in his capacity as General Secretary of the Organisation of American States (OAS) without appropriate knowledge of the institutional processes and principles of that organisation.
Luis Almagro, who is renowned as an enemy of the people of Venezuela, has created a series of falsehoods against the Republic of Venezuela with the sole objective of promoting international intervention in our country and accentuating the economic war taking place against Venezuelan society. His actions at the head of the OAS have surpassed his powers, and have been marked by an abuse of power, directed solely on the basis of the hatred he holds towards Venezuela, and in collusion with the extremist, anti-democratic and coup-supporting Venezuelan opposition. The disdainful resentment that guides those who have converted to an extreme position is what motivates his actions, and his appalling writings will be lost in the depths of history, recorded as an example of how a subservient person is capable of destroying the workings of an organisation.
It is unfortunate that Mr Almagro should seek to revive the darkest pages of the interventionist and coup-sponsoring history of the OAS through the imposition of mechanism that blatantly violates the legal and constitutional order of Venezuela and the Charter of the OAS - the fundamental principles and strict rules which guide its actions. On June 15, 2016, the Foreign Ministers of the hemisphere met in the General Assembly, in order to express their worry surrounding such irregularities in conduct and decided to remit to the Permanent Council a review of Almagro's performance. Luis Almagro spearheads the live show of the fascist right-wing which relentlessly harasses, bullies and attacks Venezuela, without any scruples or principles, and which is characterized by the illegal and fraudulent use of falsehoods against our sacred Homeland.
The Bolivarian Republic of Venezuela will take the corresponding appropriate actions in due course, and denounces before the whole world the aggressive intentions from this wrongdoer against our unwavering decision to carry on living in peace, with independence and sovereignty, as is the right of all peoples throughout the world. The miserable and insurrectional conspiracies and actions that Luis Almagro seeks to promote through the OAS will not stop our Homeland and our People from pursuing the bright future mapped out by our Liberators.
Caracas, Venezuela, March 14, 2017
Posted by Cindy Sheehan's Soapbox at 4:41:00 PM