"For our Freedom and Other Stuff" by Cindy Sheehan 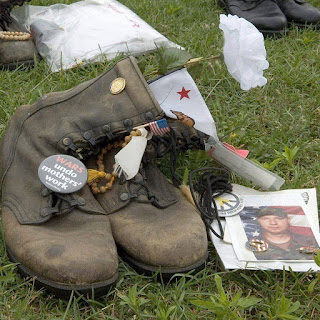 This weekend is the 13th Memorial Weekend since my son Casey was killed in another US war for profit and global domination.

Memorial weekend is a "double whammy" for me because not only am I assaulted with "red, white, blue," gross displays of nationalism, and proclamations of "we honor them because they made the ultimate sacrifice;" but Casey's birthday was May 29th and it always falls on our around Memorial Day. Although, now 38 years in the past, as a mother, the labor's struggle of bringing him into this world and the joy of the culmination of that hard work is still fresh in my mind. As soon as his head emerged from me, he was crying and all eight pounds and two ounces of him were perfect; Tears are pouring from my eyes thinking about it. My body fed and nourished him inside and outside the womb and his sweet spirit and cheerful presence fed and nourished my soul for 24 years until he was wrenched from me for evil purposes.

I can't abide cable news and its devotion to Empire, so I usually put on local news in the morning to hear about weather and local happenings which is occasionally sprinkled with devotion to Empire, but not as bad as CiaNN, Faux News, or MSNBCia (for example). Predictably, today the local news was also spewing forth nationalistic bullcrap.

This morning, as I sipped my coffee and checked my overnight load of email, one local station was showing Cub Scouts putting flags on the graves of veterans at a cemetery in Sacramento. Not all veterans, or those killed in action, are buried at military cemeteries. Casey is buried here in Vacaville at the town cemetery. So, on Memorial Day, flags are placed at the grave of each veteran to distinguish between veterans and "norms" like us.

One leader of a Cub den was interviewed and asked why he was out there so early to do this and he actually said, he was there because many soldiers died for "our freedom, and other stuff." Well, the "freedom" part is a baldfaced lie, but that Cub leader probably doesn't know that because we here in the Empire of Lies have been conditioned our entire lives to believe that one essential fabrication: if the young people of the US weren't sacrificed on the altar of profit and if they didn't go and murder other people in foreign lands, then we wouldn't be "free."

"Free" in the United Police States of America?

One nation, Under Surveillance?

"Free" in the nation that incarcerates more of a percentage of its citizens (mostly people of color) than any other in the world?

Leave me a mother's indulgence to expand upon the "other stuff" of the Cub leader's imagination, as a matter of fact, I can do no better than to quote Major General Smedley Darlington Butler in War is a Racket:

“Beautiful ideals were painted for our boys who were sent out to die. The was the "war to end wars." This was the "war to make the world safe for democracy." No one told them that dollars and cents were the real reason. No one mentioned to them, as they marched away, that their going and their dying would mean huge war profits. No one told these American soldiers that they might be shot down by bullets made by their own brothers here. No one told them that the ships on which they were going to cross might be torpedoed by submarines built with United State patents. They were just told it was to be a "glorious adventure".

Thus, having stuffed patriotism down their throats, it was decided to make them help pay for the war, too. So, we gave them the large salary of $30 a month!

All that they had to do for this munificent sum was to leave their dear ones behind, give up their jobs, lie in swampy trenches, eat canned willy (when they could get it) and kill and kill and kill...and be killed”
― Smedley D. Butler, War is a Racket: The Antiwar Classic by America's Most Decorated Soldier


With sadness, I watched those darling, young Cub Scouts (Casey achieved rank of Eagle Scout) being force-fed patriotism and its even more terrible cousin, nationalism. As a recovering "good American" myself, I was a Girl and Boy Scout Leader, so, I can only imagine after they the little ones were finished with their task, they gathered for pizza or donuts and made a fun day out of it with carnivals and parades.

A few weeks after Casey was killed in Iraq was his birthday and Memorial Day. Casey's dad and I were invited to the cemetery where he is buried to participate in a service. I was in the stands in a place of "honor" with mothers whose sons had been killed in Vietnam. They weren't as distraught as I was, but they didn't look very "honored" to be there, either. Shortly after that, I embarked on my public career to not allow my grief to be "honored" but to shove it in the faces of everyone who supports war without having even the tiniest inkling of the profound despair US military mis-adventurism causes. Consequently, I was never again invited back to one of those "celebrations."

So, on Casey's birthday, I will do what I do every year since the first one: Go to where he is buried with tears on my face, remove the bloody flag of Empire from his grave and re-dedicate my life to ending the Empire.

In Casey's name and for his legacy.