Apricots and Sisters by Cindy Sheehan 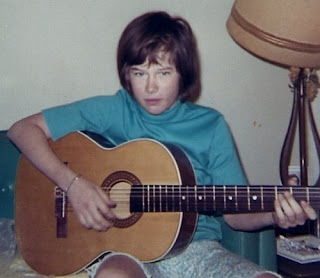 As many of you know, my sister, comrade, best-friend and many times over, jail mate, Dede Miller passed away from breast cancer on January 22 of this year.

June 16th would have been her 59th birthday and what many of you may not know is that Dede and I were what is sometimes referred to as "Irish Twins." (Born within a year of each other).

I am not sure what year it was, though, when I turned the tables back on her and was able to proclaim, "Ha ha, you are as old as me now!"

Dede and I may not have shared our mother's womb, but over our lives, we grew to be as close as some twins and closer than any sisters I have known. Especially after Casey died, she was the only one who never said, in essence, "get over it," when I was experiencing the most profound grief. She couldn't understand my pain, but she knew on some level that she couldn't change it, or rush me in getting "over it." Understandably, my deep loss and horrible pain frightened a lot of people, but not fearless Dede. She was just always there when I needed her, and many times when I didn't even know I needed someone.

Being so close in age, I can't remember a life without Dede; she was the only one that shared my entire history and since she passed, I can't even say how many times I have wanted to check with her about something to make sure I was remembering everything correctly.

And after we both went to Crawford, Tx on August 6, 2005; she was with me every step of the way after. Dede never "disowned" me when I did such socially unconscionable things as meet with then president Hugo Chavez of Vz (in fact, she was there, too) or *gasp* leave the Democrat Party and run for Congress against Nancy Pelosi.

When I called the US the "biggest terrorist organization in the world," Dede didn't back away from me, or soft-pedal what I said, she said, "You're damn right it is."

Dede also withstood some horrible treatment from me during the most stressful times of being infamous. I always apologized when I got out of line with her, but I knew consciously and subconsciously that, besides my children, she was the only person in the world who would love me and support me, even if I was not always pleasant to be around. I would hope everyone has someone like this in their lives, it's beyond priceless.

Dede and I grew up in a dysfunctional household, but our first home had two very mature apricot trees in the backyard. Oh my gosh, we spent hours in those trees that were there for climbing and yielded the most wonderful fruit. Many summer days, we would leave our home in the morning and graze the neighborhood for lunch. We had apricots; wild onion grew between our house and the Crittenden's and another had avocados. At dinner time, we would grudgingly return home and even if our mom didn't do much else, she always cooked a good dinner. Looking back, it seems idyllic although I know it was not. Dede often joked that we were "feral children." There were many times, also, that we would unite against our father who made us pick up the rotten fruit. Of course, we would have had the task done in a heartbeat, if we didn't spend so much time complaining or pretending we had to take a long potty-break.

Ironically, apricot seeds contain laetrile that has been shown to be a natural treatment for cancer.

Dede lived with me the last year and a half of her life. Coincidentally, the home I rent has two apricot trees in the front yard (that my grandchilden spend hours climbing) and the past two years of good rain have contributed to massive amounts of fruit. Dede enjoyed the 'cots from the tree, but last year I did something I have never done: I canned the excess fruit and made jam. It was delicious and every time I served it to her, I would say, "here's a little taste of summer sunshine for you."

Tomorrow, on her birthday, I am planning on canning this year's crop and putting some extra love and nostalgia into this batch. 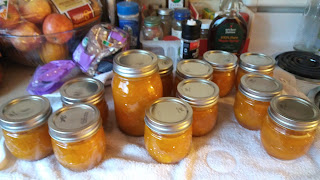 
Apricots for Dede and jam for the rest of us.

I miss my twin.