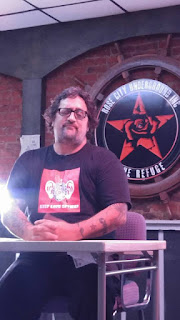 Emidio "Mimi" Soltysik (born October 30, 1974) is an American political activist for the Socialist Party USA. He was the party's nominee for President of the United States in the 2016 election.
From October 2013 to October 2015, Soltysik served as National Co-Chair of the Socialist Party USA. Prior to that, he served as National Vice Chair from 2011 to 2013.