Of "Heroes" and "Communist Dictators" by Cindy Sheehan 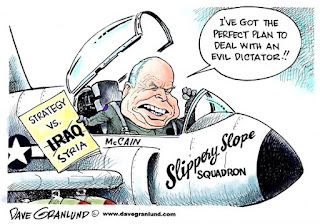 The first time I met Senator John McCain, I was still under the false impression that, even though he was a Republican, he was still slightly independent and not entirely reprehensible.

The occasion was the now infamous meeting our family had with then president George Bush in 2004, about six weeks after Casey was killed in Iraq.

Our family was invited for a “sit-down” with Bush at Ft. Lewis up near Seattle. The government was paying, so we agreed. We had some things we wanted to “chat” with him about, also.

Along with about 16-17 other families in the same piteous situation, we cooled our jets for awhile in a waiting room at the base hospital. After a bit, we were ushered into a small curtained room to wait for 43. While we were waiting, the curtains parted and in walked McCain. I did mention to him that he had been a POW in another immoral war and I asked him why my son had to die. His response: “Well Cindy, if we don’t win in Iraq, then I am afraid for nothing.” After McCain left, we all wondered if he had been the “opening act” for Bush.

By that time, I was now very active opposing Bush and the wars and had founded Gold Star Families for Peace. I was invited to appear on Good Morning America (from the Library of Congress) early on the morning of the inauguration. After the interview, I was leaving and John McCain walked in to be interviewed—I reminded him that we had met at Ft. Irwin and I told him what I was up to. His response (which he later denied in our 3rd meeting) was: “The country needs people like you, too.”

After I protested Bush and the wars at Camp Casey in Crawford in August of 2005, I went to Washington DC for a huge antiwar rally in September and I met with many reps and Senators and John McCain was one of them. I reminded him that he had encouraged me to protest the war back in January and he said, “Why would I do that, I support it?” On the way out, he said, “Good luck, Cindy.” I said, “Thank you, you are wishing me luck to end the wars.” He said, “I take it back, then.”

I have been in Phoenix at his office a few times opposing his bellicosity with my dear antiwar friends there.

Since my first meeting with McCain in 2004, I am under no illusion that he is “independent” or not too reprehensible. In a nation of reprehensibles, he is near the top (or bottom) of the dung-heap. It's normal that conservatives are praising him, but he is being lauded by liberals as an "American hero" also. That a war criminal who, with his own hands, murdered untold number of Vietnamese and with either incompetence or arrogance murdered 134 sailors on his aircraft carrier the USS Forrestal in Vietnam is considered a “hero” doesn’t say very much about this country.

Among others, Senator Bernie Sanders (D-Vt—-yes, I know technically he is independent, but he’s about as independent from the Dems as McCain is from the GOP) has heaped praise upon the head of the slimy McCain since he was diagnosed with brain cancer. Now, I don’t expect Bernie Sanders to tweet, “Nice, a war criminal has cancer; isn’t karma a bitch?” But how can a person who protested the Vietnam War tweet this about McCain?

John McCain is a hero, one of the most respected senators and a friend. The hopes and prayers of the nation are with him and his family.

In the ill-fated campaign of Sanders for president, after he was “accused” of being a supporter of President Hugo Chavez of Venezuela (CitGo oil provides low-cost or free heating oil for poor people in the Northeast), Sanders campaign sent out a fundraising blast to his supporters trashing the beloved Chavez by calling the populist president of Venezuela who was democratically elected many times (and survived a coup attempt and recall effort) a “dead, communist dictator.” (Unfortunately, he got the "dead" part right).

I was very privileged to know Hugo Chavez, and in contrast to McCain who never met a war he didn’t like, or a pocket he didn’t want to pick in reverse Robin Hood style, Chavez was a warm person who had a big heart and used the power of his office to elevate the condition of the poorest—often at the expense of the parasitic wealthy.

When Chavez was a military officer, he noticed that the government that he was sworn to serve was horribly oppressing its own people and, with other officers, tried to overthrow it.

On the other hand, McCain, who graduated 2nd to the bottom of his class at the Naval Academy used his military career to carouse and murder his way through Vietnam and with the help of his Admiral father, covered up his crimes to use his “heroic” “service” as a stepping-stone for greater political power.

If Obama and Sanders and many liberal talking blah-blah heads are praising the “American hero” McCain are they saying that the war in Vietnam was "heroic" and the millions of Vietnamese who died and continue to die from their poisoned country and landmines are just shit?

John McCain is an American hero & one of the bravest fighters I've ever known. Cancer doesn't know what it's up against. Give it hell, John.
— Barack Obama (@BarackObama) July 20, 2017

Liberals (like this clip from The View), who thought McCain was the reincarnation of Adolf Hitler when he ran against Obama in 2008, are now gushing over how McCain corrected a woman on TV who was afraid of Obama because she thought he was an “Arab.”

“No,” McCain thoughtfully and with his "great" flair of being so gosh-darned "independent" corrected the woman and said that Obama was not an “Arab,” but a “good person.” Cogitate on that for a moment—liberals are praising a deeply bigoted statement. Like the Vietnamese, do liberals consider Arabs as shit?

John “Bomb, bomb, bomb, bomb, bomb Iran (and everywhere else, while we're at it),” McCain has been one of the biggest devotees of this country’s imperial misadventures his entire life; however, the “Communist dictator” never once invaded or infested another country by his military. No, Chavez used Venezuelan oil and the force of his personality to not only improve the lives of Venezuelans, but to forge alliances and friendships throughout Latin America and the Caribbean. Yes, even improving the lives of the poor in the United States.

Meeting McCain was like meeting a robot with insincere blue eyes: a male Hillary Clinton, if you will. With few exceptions, the humanoids that inhabit US politics are cold, calculating and murderous liars.

Meeting Chavez was like coming home to your long lost brother who only wanted good things for everyone and was expansive and genuine in his hospitality and courageous in standing up to the Great Satan of the North.

I am not afraid to say that, although I am not thrilled that McCain has brain cancer, I am in no way sad about it, or conflicted about calling out the terrible crimes against humanity this man has committed in the name of American “heroism.” Illness, near death, or death itself should not confer immediate sainthood on profoundly criminal lives.

I would rather see him and his ilk rotting in Ft. Leavenworth.

Cancer claimed the lives of my sister Dede Miller and my comrade Hugo Chavez and millions of other good people, often after torturous struggles. Now, McCain.

The death of Chavez was a great loss to humanity; the death of McCain, not so much. We should have exactly the same sympathy and compassion for McCain that he showed to all his victims--at home and abroad--which is zero.


Cancer is the deadly and too prevalent equalizer: it takes the good and evil, alike.


UPDATE:
John McCain passed away on 8/25/18---while we don't celebrate his death (we mourn for his scores and scores of victims), we do not think it's appropriate to elevate him to some great hero. Here is an update on the tweets from people whose devotion to US Imperialism should no longer be denied:
FROM BERNIE SANDERS:

John McCain was an American hero, a man of decency and honor and a friend of mine. He will be missed not just in the U.S. Senate but by all Americans who respect integrity and independence. Jane and I send our deepest condolences to his family.
— Bernie Sanders (@SenSanders) August 26, 2018

People like @SenJohnMcCain do not come in bunches like grapes. They are rare like pearls. He represents the best in us. May God give him a special place in his bosom. pic.twitter.com/mQ0jdj3JcE
— Rev Jesse Jackson Sr (@RevJJackson) August 26, 2018

As an intern, I learned a lot about the power of humanity in government through his deep friendship with Sen. Kennedy.

.@SenJohnMcCain was a leader & public servant of deep patriotism, outstanding bravery & undaunted spirit. Throughout his career, we all saw his integrity, humility, courage & grace. May it be a comfort to his family to know that so many around the world mourn with them.
— Nancy Pelosi (@NancyPelosi) August 26, 2018

.@SenJohnMcCain lived a life of service to his country, from his heroism in the Navy to 35 years in Congress. He was a tough politician, a trusted colleague, and there will simply never be another like him. My thoughts and prayers are with Cindy and his entire family.
— Hillary Clinton (@HillaryClinton) August 26, 2018

Senator John McCain was a warrior for peace. He will be deeply missed by people all around the world.
— John Lewis (@repjohnlewis) August 26, 2018

John McCain fiercely loved our country. I appreciate his dedication to public service and respect his courage in rising above partisan politics to do what was best, as in his vote to save Obamacare. RIP, Senator. My sincerest condolences to his loved ones at this difficult time.
— Keith Ellison (@keithellison) August 26, 2018