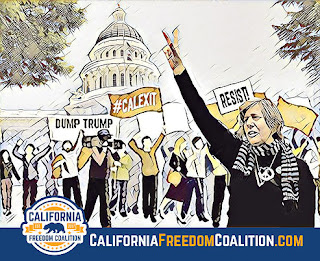 Since my son Casey was killed in Iraq on 04/04/04, I have consistently taken steps to remove myself from the government of the USA: I stopped paying income taxes (how can I fund more murder after I essentially funded the murder of my own son?); I sold my car; dumped my house; and vocally oppose just about everything America does. Unfortunately, I still have a US passport and I feel like, not only do I want to live in California, my surviving children (5th generation Californians) and my five grandchildren (6th generation Californians) live here, so I feel I need to live here.

Also, why should I be forced to “love it (the US) or leave it?” Mostly, almost all the people who can afford to be so mobile and move around the world are the people who create untenable living conditions for the rest of us.

Having written the above, you can imagine that I was extremely excited when I saw that there was a renewed interest in California Independence! I quickly contacted leadership of the movement and became involved myself and am now on the board of the California Freedom Coalition.

On May 19, 2017 about two-dozen of us joyfully, yet with a sense of gravitas, filed paperwork in Sacramento at the office of the Attorney General to put California Independence in front of Californians in the form of a ballot initiative. Currently, we are awaiting approval from the AG of California to begin collecting signatures.

As with the first American Revolution in 1776 (an effort which few colonists supported, at first, so the “Patriots” also had to wage a battle to win the “fence-sitters” over), it has become “self-evident” to some of us here in California that the US government (USG), way across the country in Washington, DC does not represent us, or our values, in anywhere near a competent, or even, humane way. We feel like we are treated as vassals to unrestrained capitalism and war.

Even California’s federal contingent that are sent to DC by the people of the state are a club of millionaires who have lost touch with California and the average Californian. How else are reps like Sen. Dianne Feinstein (D) and Nancy Pelosi (D) able to constantly vote for wars, war funding, and work diligently to protect the out of control US regime and corporate interests?

While California is one of the leading economies in the world, there is still an appalling unemployment and homeless problem. Following the trajectory of the US, California’s good, manufacturing jobs have fled for greener pastures and what’s left for us: service jobs or the military. Californians send billions to the USG to support US military adventurism, and while we mostly don’t support the wars, our young people and families pay the highest and irredeemable prices in war deaths, injuries, and the deepest cut: suicide.

If left in the Republic of California, what we here in the state could do with our human, natural, and financial resources, is almost limitless.

I grew up in a California that took education and enrichment of its young people seriously! Compared to when my own children started public school in California and everything extra was fee-based, the teaching of the “three r’s” was exemplary, and the subjects that make a student well-rounded like music, theater, art, summer school, field trips, and driver’s ed were free and accessible to everyone.

Also, quite extra-ordinarily, state colleges and universities were tuition-free up until the Ronnie Raygun era. Our energy is extremely left-wing and, regarding education, we only want what we had before: fully-funded and quality public school education.

Similarly, the potential of a free California to lead the world in peace, education (the wealthy state of California consistently rates in the bottom 10% in education in the US), meaningful and full-employment with good wages and benefits, sustainable energy production, clean agriculture, clean water, clean air, etc.


We, the patriots and matriots of Californian Independence not only want a healthier country to live in, we also feel that if California does become independent from the bloody US Empire, it would ultimately deal a death blow to that Empire. Without California, the US will have to scale back its sick habit of regime change/carnage around the world, or perish. I would rather have the US voluntarily follow California on a much more peaceful and sensible path for humanity, but if it perishes, that is fine, too. Anything to stop the Empire’s reign of terror around the world.

This is in no way a rightwing “Free State of Jefferson” movement (CalSplit vs. CalExit) that seeks to add another state to a nation that has, beyond a shadow of any doubt, demonstrated its psychopathic tendencies. We don’t advocate for an independent California to further separate the rich and the poor, but to retain the beautiful diverse nature of our state; and to elevate everyone in equality and prosperity (some people will have to de-elevate, but, that’s only a matter of time, too).

We in the movement also recognize that under a complete Democratic majority since Jerry Brown was re-elected as Governor in 2010, that few things have improved for we the people. Brown and the other Democrats seem to be in the back pockets of big oil, big pharma, private prisons, charter schools, and war profiteers. The Democrat majority in Sacramento (every state office and majorities in both the Senate and legislature) allows the US Empire to maintain at least 50 military installations in California and California leads the nation in the export of death and destruction in the form of aerospace and defense industries. A free California could lead the world in re-tooling industries to (for example) create and maintain sustainable, clean forms of energy production and other healthy endeavors.

Consequently, this is also not a “liberal” initiative that only wants to skedaddle because Trump is the current CEO of Murder, Inc; only to return to again beg for scraps from our “master’s” table when a Democrat once again assumes that position. This is a bi-partisan effort that strives to leave the divisions of the US behind and join together as Californians of all demographics to put the power and future of California where it rightfully belongs: in our hands and in our communities.

To succeed, this effort must be diverse, wide-reaching, inclusive and we must be able to unite all workers against two common enemies: capitalism and it’s decaying, end-state, Imperialism, which are embodied in the United States of America.

I was honored to be asked to sign the “California Declaration of Independence,” and the significance of this was not lost on any of us.

We are working hard for success and we all know that it will happen and it will be good for everyone (except the 1%, at first), but we wondered how did the signers of the Declaration of Independence feel on the sweltering day (it was also hot in Sacramento on 19 May) of 4 July, 1776? I am sure, like we, they were optimistic, excited, and a little fearful of what terror would be unleashed by the major Empire of that day.

Nothing can be achieved without people willing to take the risks of ridicule, demonization, marginalization, or worse. We won’t become free until we demand freedom. As the great abolitionist Frederick Douglass stated in 1857, “power concedes nothing without a demand.”