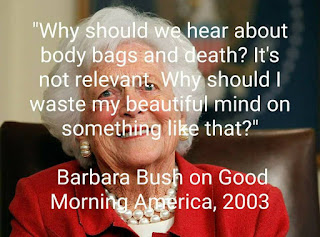 So the wife of one war criminal and mother of others has died at the very ripe old age of 92--according to the establishment media and political oligarchy, we are supposed to be remembering a "plainspoken political icon" (LA Slimes, April 17, 2018) instead of the Wicked Witch of War Criminals.

I think it's incumbent upon we in the 99% to recall the devastating remarks she made on Good Morning America on the eve of the war that killed my son:

"Why should we hear about body bags and death? It's not relevant. Why should I waste my beautiful mind on something like that?"

Or her callous disregard for Katrina refugees: 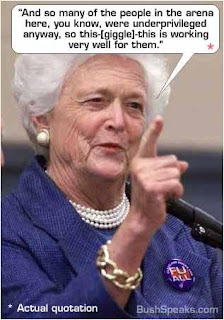 Death does not confer respectability on such a privileged and cold-hearted life. She and her killer spouse reportedly played golf the day after their young daughter died from leukemia. This kind of behavior cannot be made up: It's deplorable and reprehensible. Maybe the death of such a one should not be celebrated, but neither should we weep. The Bush's wealth and the wealth of the other oligarchs can be proven to be ill-gotten by the exploitation of the rest of us and they should be resented, not worshiped.

The only reason I bring her death up now, is not for the one solitary death of one of the political oligarchy, but because of what she represents: the pinnacle of diseased capitalism and imperialism. Like the indigenous people of the USA said, "we kill one soldier, and 100 others arise." The ideology of death and destruction that the life of Barbara Bush represented must be vigorously and militantly opposed, but first we have to be real and not pretend to be sad about something we are not, or should not waste our beautiful minds on.

Before I post the Open Letter I wrote to her in 2005, let's see what other members of the political oligarchy are saying about her demise:

From the Nouveau Oligarchs, the Obamas:


From the "savior" of the people,  Bernie Sanders:

Barbara Bush will be remembered as a strong, independently minded and popular First Lady who was devoted to her family and her country. Jane and I send our condolences to the Bush family.
— Bernie Sanders (@SenSanders) April 18, 2018

Thinking about Barbara Bush’s legacy of service to our country and the extraordinary family she raised. Thanking her for her many kindnesses to me and my family. Wishing her the comfort she deserves surrounded by her loved ones.
— Hillary Clinton (@HillaryClinton) April 16, 2018


Democrat 1%ers like Pelosi are falling all over themselves to praise the Wicked Witch of War Criminals:

Tonight is a sad night for America. First Lady Barbara Bush will be remembered for the dignity, civility & spirit she brought to every thing she did. But most of all, everyone who knew Mrs. Bush saw her immense love for & pride in her family. pic.twitter.com/bDrauy3U67
— Nancy Pelosi (@NancyPelosi) April 18, 2018

Open Letter to Barbara Bush from Cindy Sheehan
(ca. 2005)
(Reprinted without edits--my writing has become more polished over the years and my political ideology has become more sophisticated, but my heart is still the same).

Unlike your oldest child, my son was a marvelous person who joined the military to serve his country and to try and make the world a better place. Casey didn’t want to go to Iraq, but he knew his duty.

Your son went AWOL from a glamour unit. George couldn’t even handle the Alabama Air National Guard. Casey joined the Army before your son became commander in chief. We all know that your son was thinking of invading Iraq as early as 1999. Casey was a dead man before George even became president, and before he joined the Army in May 2000.

I raised Casey and my other children to use their words to solve problems and conflicts. I told my four children from the time that they were small that it is always wrong to kick, bite, hit, scratch, pull hair, etc. If the smaller children couldn’t find the words to solve their conflicts without violence, I always encouraged them to find a mediator like a parent, older sibling, or teacher to help them find the words.

Did you teach George to use his words and not violence to solve his problems? It doesn’t appear so.

Did you teach him that killing other people for power and oil is always wrong? Obviously you did not. I also used to wash my children’s mouth out with soap on the rare occasion that they lied… did you do that to George? Can you do it now? He has lied and he is still lying. Saddam did not have WMDs or ties with al-Qaeda and the Downing Street Memoranda prove that your son knew this before he invaded Iraq.
On August 3rd, 2005, your son said that he killed my son and other brave and honorable Americans for a “noble cause.” Well, Barbara, mother to mother, that angered me. I don’t consider invading and occupying another country that was a proven non-threat to the USA is a noble cause. I don’t think invading a country, killing its innocent citizens, and ruining the infrastructure to make your family and other merchants of death even richer is a noble cause.
So I went down to Crawford in August to ask your son what noble cause he killed my son for. He wouldn’t speak with me. I think that showed bad manners. Do you think a president, even if it is your son, should be so inaccessible to his employers? Especially one of his bosses whose life George has devastated?
I have been to the White House several times since August to try and meet with George and I am going back to Crawford this week. Do you think you could call him and ask him to do the right thing and bring the troops home from this illegal and immoral war that he so carelessly started? I hear you are one of the few people he still talks to. He won’t speak to his father, who knew the difficulties and impossibilities of going into Iraq, and so didn’t go there in your family's first Gulf War. If you won’t tell him to bring the troops home, would you at least urge him to meet with me?
You said this in 2003, a little more than a year before my dear, sweet Casey was killed by your son’s actions:
“Why should we hear about body bags and deaths? Oh, I mean, it’s not relevant. So why should I waste my beautiful mind on something like that?” (Good Morning America, March 18, 2003)
Now I have something to tell you, Barbara. I didn’t want to hear about deaths or body bags either. On April 04, 2004, twp Army officers came to my house to tell me that Casey had been killed in Iraq. I fell on the floor screaming, begging the cruel Angel of Death to take me too. But the Angel of Death that took my son is your son.
Casey came home in a flag-draped coffin on April 10th. I used to have a beautiful mind too. Now my mind is filled with images of his beautiful body in his casket and memories of burying my brave and honest boy before his life really began. Casey’s beautiful mind was ended by an insurgent’s bullet to his brain, but your son might as well have pulled the trigger.
Besides encouraging your son to have some honesty and courage and to finally do the right thing, don’t you think you owe me and every other Gold Star parent an apology for the cruel and careless remark you made? Your son’s amazingly ignorant, arrogant, and reckless policies in Iraq are responsible for so much sorrow and trouble in this world.
Can you make him stop? Do it before more mothers’ lives are needlessly and cruelly ruined. There have been too many, American and Iraqi, worldwide already.