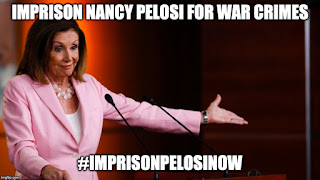 
Back in 2009 president-elect Barack Obama was asked by George Stephanopoulos if prosecuting the Bush regime for war crimes was in the cards and while rejecting that idea, he had this to say about investigating torture and the unnecessary deaths of over one million people in Iraq, “ (Obama held) "a belief that we need to look forward as opposed to looking backwards (sic).”

I paraphrased Obama’s comment at the time as, “I cannot prosecute the former Commander in Chief, because I need the same professional courtesy from the one who will follow me.” Of course, after committing many such atrocious war crimes and crimes against humanity while U.S. president himself, my conjecture at his motives were unfortunately pretty on target. My hypothesis then was based not on a Tarot card or tea leaves reading, but the reading of past U.S. history. Even though the office of POTUS is riddled with thugs and war criminals, some massive, some not so massive (but still horrible), not one U.S. president has been held accountable.

I posted an article last week that I authored about the impeachment circus centering around House Speaker Nancy Pelosi and her new-found zeal for the rule of law and the U.S. Constitution in prosecuting the Trump regime and one of the questions I asked was “why?” Why was she now such a “Warrior Goddess of the U.S. Constitution" when she refused to institute an investigation against the blatant war criminal George W. Bush? Well, recently at a CNN town hall meeting she appeared on, to my delight, an audience member asked him this very question.

Her answer (watch link here) was long, rambling, and at times incoherent, but basically, her answer boils down to: “Look, I was the ranking member on the House Intelligence Committee before the war and we knew that Saddam had no WMD.” Then she went on to mock people who “still believe” that Iraq had anything to do with 9/11.

So, right there on national TV, without an ounce of shame or remorse, she admitted to being an accomplice of the Bush regime in war crimes and crimes against humanity. I am not an attorney or legal scholar, but I do know that there is no statute of limitations on murder and maybe a new wing should be added to Ft. Leavenworth prison to incarcerate every war criminal---Democrat or Republican--who lied about this mass murder.

Over one million Iraqi were killed in that war crime with several million more being displaced or maimed. BABIES are being born with deformities and children are dying from cancer at an alarming rate due to the introduction of depleted uranium and other war-toxins into that country by the US Military and its profiteers. This person Pelosi and everyone else who was complicit in these war crimes—including Secretary of State and noted war criminal Colin Powell who is now calling for Republicans to “do the right thing” and remove Trump from office—should be rotting in federal prison, at the very least.

I would like war criminal and apparent sociopath Pelosi to think about what she did and continues to do during this holiday season, being the “good Catholic” that she claims to be: not only did her lies and cover-up of the truth decimate Iraq (with the crimes continuing to this day), almost five-thousand US troops (including my son Casey) were killed with many more being wounded and about eight Iraq/Afghan veterans committing suicide every day, to this day. Unforgivably, Pelosi. is prospering and has her crime-family intact and she doesn’t have to go buy poinsettias for her son’s grave this holiday season.

My son Casey was a vibrant, loving human-being who did always try to do the right thing. The last time we physically saw him was Christmas of 2003, and he told everybody that he “didn’t want to go to Iraq, but he had to,” and he was certain that he couldn’t “kill anybody,” and he was killed in combat very shortly after he arrived.

Pelosi could have stopped this, slowed it down, or ameliorated the damage if she weren't such an A + member of the heinous U.S War Establishment. With the authority of being the "ranking member" of the House Intelligence Committee, she could have credibly made the case against war, but she knowingly and WITH MALICE aforethought chose not to.


You will notice that Pelosi has been a fundamental player in US politics for several decades and in a leadership role for many of those years. POTUS administrations come and go, but Pelosi seems to be forever. One can argue that Pelosi is not a "major player" in US scandals, but I think the facts belie this. She is able to accumulate power through her wealth and longevity and I don't think anyone should underestimate her political cleverness, even if she's not very articulate at times. Pelosi openly admitted this on national TV and it makes me wonder about all the crimes she hasn't confessed to.

Pelosi and her ilk are drenched in the blood and gore of millions, but now she is going ahead with the impeachment of Trump for not selling weapons to the neo-Nazi’s in Ukraine fast enough (weapons that are used to murder their opposition)? For appealing to a Ukrainian official for the investigation of a Democrat (Biden) who was a member of a regime that helped to install those neo-Nazis in Ukraine in the first place and for using his influence as Vice President to get his son a very lucrative job?
In a different place, or time, maybe, Pelosi's admission would be monumental and proceedings would be instituted to hold those responsible accountable, but face it, we live in the era of the soundbite/worship of wealthy war criminals, but only we can prevent this from going down the memory hole with many other truly significant things. The antics of the clowns in Congress (and let's never forget the devious role of their minions in the corporate media) would be amusing if there weren’t so much at stake with their monumentally vicious crimes: the crimes of aggressive and pre-emptive war.