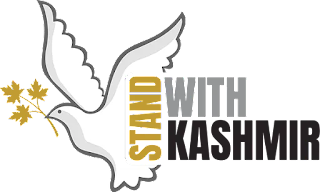 OCCUPATION IS A CRIME.

SELF-DETERMINATION IS A RIGHT.

Idrisa Pandit is a social justice activist and an interdisciplinary Studies scholar based in Waterloo, Ontario. Idrisa is also the founder of Muslim Social Services of Kitchener-Waterloo and a member of Interfaith Grand River. Idrisa has been recognized for her volunteerism and community contributions. Among her numerous awards are the University of Waterloo 2017 President's Community Award, Ontario's 2016 Leading Women Leading Girls Award, and the Oktoberfest 2016 Woman of the Year Award. Idrisa's research and writing focuses on interfaith relations, anti-oppression, anti-racism, gender and Islam, and the Kashmir Conflict. Follow Idrisa Pandit on Twitter here

The Kashmir Scholars Consultative and Action Network (KSCAN), is an interdisciplinary group of scholars from various countries and regions engaged in research on the region of Kashmir. Each of us has written about Kashmiri history, society, culture, and politics, and their relation to the protracted conflict; and we are particularly concerned about the present conditions of violence. Our research on the Kashmir conflict addresses its history, its consequences for the region and beyond, and its possible resolution. It has implications for an internationally mediated political solution and is of relevance to policy makers.