As most of you reading this, I had never been in a general quarantine before; so, in this blog on March 19th, I started what I had planned to be a quarantine series called "A Sheltered Life." I quickly learned after a few entries, that above all, sheltering in place (SIP) was super-boring, and I ran out of ways to say nothing.

However, looking back to Day One, I wrote this:

1) The US government and its servants are never going to allow a "good crisis" to "go to waste." Rahm Emanuel---democratic politician

2) The USG and its servants will never tell you the truth and is, in fact, relishing in all of these police state measures they are forcing on us. I don't think we've seen the worst of the measures, unfortunately.

3) STRESS is the number one factor that will lead to chronic or serious illness. For me, to reduce this stress, I am curtailing social media for now and NOT social distancing myself from my close family who shares everything, including germs. A day without grandchildren is like a day without sunshine.

4) Constant arguing about every little damn thing is going to turn us into a nation of bitter trolls. Come out from under that bridge!


Of course, all of my predictions have come true in spades and I am reflecting on Day 72 about how rapid things have declined.

It's 4:01 AM on Day 72 of Melt-Down USA and I cannot go back to sleep. I woke up about 45 minutes ago because I had to use the bathroom and I, unfortunately, looked at my phone and I saw I had a text message---this one was from my daughter Carly who lives in Vallejo, California:

I know you're asleep so I'm sorry if this wakes you but people here in Vallejo are attacking the police station by our house and the police are firing flash-bangs back at them....It's crazy.


So, I texted back to her to see if she and her partner were okay, and, she's probably asleep---hopefully, asleep because I haven't heard anything back from her. I tried looking at local news to see if anything was happening, but, unlike L.A., where I grew up, apparently SF Bay Area news doesn't do live coverage of rebellions (I refuse to call them "riots.") *

Vallejo has a sordid history of police brutality against the black community. Before social distancing became a thing that prohibited community gatherings, this item was on a local TV station's website:

VALLEJO, Calif. (KGO) -- Family and community members held a "Fight For Our Lives" rally and vigil to remember three black men who were shot and killed in separate incidents in Vallejo by police. All three families are filing lawsuits.

"We are tired of police brutality in the community and not being able to do anything about it lawfully," says Damariee Cole, the nephew of Willie McCoy.

Last February, McCoy fell asleep late at night while in the drive-thru at a Vallejo Taco Bell, located in the 900 block of Admiral Callaghan Lane (which is now a Starbucks). When police arrived on scene, one officer allegedly thought McCoy had a gun in his lap and police allegedly fired at him 55 times. Cole believes police had other options.

"What's the protocol when it's a bomb? Do you go approach the car, or do you stand back and use other tactics?" says Cole.

Well-known civil rights attorney John Buriss is representing the family. He is demanding that the Solano County District Attorney file charges against the six officers involved in the shooting. They are also suing the Vallejo Police Department.


"Given that he was shot 55 times, while essentially asleep, and he was awakened and then shot, that seems that that represents murder," says Buriss. "Part of that case, we are alleging a pattern and history of condoning police misconduct and police shootings."

"It is pretty clear to us, looking at these videos, that crimes have occurred," says Nold. "In the past, the victim's families have been intimidated, ran out of town. That's not going to work this time. Because we are not going to go away."

McCoy's family says they were told that the investigation is on-going.

The Vallejo Police Department and the Solano County District Attorney's office did not return requests for comment.

As concerned as I am for my daughter and her black partner, I see that like the uprisings after the Rodney King verdict, communities that have been subjected to relentless police brutality with little or no accountability are the most vulnerable to the social unrest after the blatant cop killing of George Floyd.

Floyd, who reportedly tried to pass a counterfeit $20 at a store was killed by a cop that has a long history of police brutality: Derek Chauvin. Chauvin and his buddy cop-onlookers had plenty of time to stop choking Floyd to death and render lifesaving aid. It was a blatant act of cruelty. If it weren't for slimy politicians like now US Senator, Amy Klobuchar, Chauvin would not have even been still on patrol, he would have been in prison after his first incident of brutality.

Now the chickens are coming home to roost. Boy howdy, are they!

I have a few reflections on this:

First of all, many people are calling the murder of George Floyd a "hoax." I am 100% opposed to that idea. This reasoning says that the ruling-class needed an excuse to place martial law on the country, so, either Floyd is still alive, or his death was pre-meditated and Chauvin will be the scapegoat (even though current charges against him are incredibly mild). Floyd and Tenneseean Breona Taylor (shot 8 times by police that entered the wrong apartment) are just two in a very long, and vicious line of unjustified police killings here in the US, after centuries of forced slavery, lynching, Jim Crow, and the KKK.

Entrenched institutional racism is real, it happens, it's ugly, it needs to stop.

What is the reason to suspect a "hoax?" The US has descended into this madness of Medical Martial Law with barely a peep from the frightened. What makes anyone think that if it wanted to, the US wouldn't put national curfews or national guard into place to shoot UN-masked people, instead of the historically suspicious masked ones?

Secondly, yes, I am sure that there are infiltrators in the protest groups (there is proof that a white cop in Minneapolis was smashing windows) and white supremacists who want to foment and instigate further trouble, but I call this "9/11 Was an Inside Job" syndrome. While I don't believe the "official story" of 9/11, I also acknowledge that after decades of U.S. brutality in the Middle East, Muslim Arabs had every justification to attack the United States. Also, after centuries of brutality here in the US against the Afro-American peoples, they have every justification to go after the systems of oppression.

Finally, there are the "why destroy your own community?" people.
The good news about these protests is that there have been legitimate targets like cop shops and state houses attacked. Also, huge corporate chains that oftentimes exploit workers and destroy the intimate business life of "mom and pop" capitalism. The Fred Hampton Institute put this statement out last week:

You cannot commodify every single aspect of living and then not understand looting as a legitimate form of protest. Looting is the ultimate strike against a system that deems mass-produced objects to be far more precious than life itself. It is humanity begging to be recognized.


The corporate news and the privileged always portray false-shock at people stealing "TVs" and "expensive tennis shoes," but while I was in New Orleans right after Katrina, what I learned from comrades who were right there during the failure of the levies was that it was diapers, formula, bread, toilet paper, sanitation supplies, bleach---you know all those essentials that the Costco Card holders went and hoarded at the beginning of this mess? Because they could afford it, they purchased pallets of essentials leaving no bean behind. 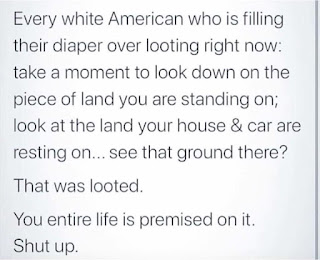 So, let's add up the equation for disaster:

At least 40 million people have lost their jobs in the U.S.
+
People are not understanding why, if the government forces them to stay home from work or close their businesses, they don't get fully compensated like Wall Street and banks.
+
Millions of high-school/college students are out of school.
+
"Essential" employees like cops are still killing unarmed black people.
+
Centuries of systemic racism are accumulating against that very system.
=
Rebellion

Pacifism is for the comfortable and even self-defense is not understood by those that can SIP in ease and don't have to worry about their next meal, or worry about their son/husband going out to try and get groceries, or run an errand without being murdered by killer cops. They don't understand that liberation from oppression is a hard fought battle and the oppressors are the ones that always wear the riot gear and bring the tear gas and rubber (and real) bullets to protests. Oftentimes these comfortable people shouting "non-violence" are entrenched participants in the systems of oppression.

Because they are frightened, white liberals often like to urgently quote MLK, Jr to shame the righteously rebellious back to order, but even MLK, near the end of his life, was recognizing that the biggest "purveyor" of violence in the world was the USA.

You can't often kum-bay-yah the bullies to appropriate, non-psychotic behavior.

Where is all this heading? I don't know. After my head stops spinning from the rapidity of the collapse, maybe I will be able to think straight, but, if there is any good to come out of this, I hope the unrest at home will stop or slow down the imperialism abroad.

One thing I do know, is that if law enforcement had swiftly done the right thing in Minneapolis and had arrested Chauvin and his accomplices, we would probably not be in the fix we are in right now.

In solidarity with my brothers and sisters out there who are courageously and physically confronting the violent police state, I join in the demands for justice and accountability.

No justice, no peace. 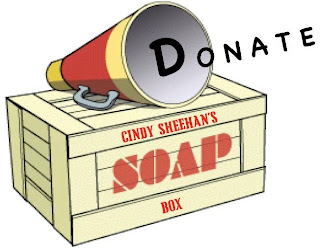