An Appeal to Mothers (Part one: Following the Money Trail) by Guest Blogger Lynn Petrovich


Over the past 20 years, as a Certified Public Accountant, I’ve prepared thousands of tax returns – both for private, paying clients - as well as pro bono clients at tax clinics at the Jersey Shore.

In fact, in my hometown, recently yet another 3-year-old was diagnosed with a brain tumor, bringing the number of pediatric cancer cases over the past few years, in my community of 27,000 residents, to twenty.

When I was growing up in the 60s and 70s, I did not know any kids with cancer.

When my daughter was growing up in the 80s and 90s, we didn’t know any kids with cancer.

So, what is going on?

As I’ve listened to parents (mostly moms) talk about their children’s conditions, they are emotionally, physically, and financially exhausted; the expense of treating cancer is enormous, evidenced by the medical bills. From what I have witnessed, out-of-pocket cost for treating pediatric cancer in America runs between $150,000 and $250,000, or more…even if you have insurance.

During this crisis, some parents take time off from work, reduce work to part-time, and/or lose their jobs.  When jobs are lost, often health insurance goes as well.  Today, with massive unemployment due to governor-ordered state shutdowns, isolation, and 24/7 mainstream media hype and fear, the stress is even greater.

With or without health insurance, parents dig into pensions, 401(k)s, savings, home equity, paychecks (taking money allocated for rent and utilities) and borrow from family, friends, and neighbors.  (One tax client, even though he was “fully” insured, was forced to take out over $100,000 from his 401(k) to pay for his child’s treatment at a hospital in Philadelphia – CHOP (more on that later.)  This was money, tax-deferred and earmarked for his family’s retirement – and which was fully taxable to this father of a young pre-teen fighting lymphoma - at the combined federal and state rate of 30%.)

While the media is rabidly focused on Covid-19, which has not been proven to be a threat to children, cancer – and other chronic, debilitating illnesses - have been destroying their bodies by the tens of millions for over a decade.
Additionally, because the US does not have universal, free, equitable, accessible health care, a Pandora’s Box of unconscionable suffering opens up.  And that gap is very quickly commandeered by the profiteers.

The uniquely American health care system is based on profit.
And a diagnosis of cancer means big money…with many hands in the pot.

In fact, in 2017, I followed $360,000 raised by a local merchant who held a 5K run.  The money was donated to a NJ children’s charity called The Valerie Fund, an organization which has been in operation since 1977.

The Valerie Fund, a 501(c)(3) nonprofit entity, (they are exempt from paying sales, income, and property taxes) pulls in big money and is connected to the most powerful hospital conglomerates in NJ.

I reviewed the publicly filed information, Form 990s, for the (then) most recent year ended 12/31/15. I wanted to follow the path of how money raised under the guise of helping children with cancer, was spent and to whom.

What I found, led me on an investigative journey of no less than two dozen nonprofit health care entities in New Jersey and Pennsylvania and a review of over 2,000 pages of documents.

Attached a spreadsheet (Exhibit A) showing the money trail of how donations for children with cancer often ends up being spent on everything but families of children with cancer.  All of the entities involved in the transfer of money are 501(c)(3) nonprofit entities.

Below are the bullet points of my findings (along with updated financial information):

-Looking at the 12/31/15 year, The Valerie Fund spent most of its operating cost ($1.9 million or 50.22%) on six grants to nonprofit foundations (the balance of costs were spent on overhead or program services which do not include – to my understanding – any financial support to families of children with cancer, other than “festive” holiday parties, camps, and psychosocial programs. (Update: grants from 2016 thru 2018 totaled $7.3 million – averaging $2.4 million annually to basically the same entities.)

-Doled out $271 million to large independent contractors – all of which were not     related     to health care or education or helping children with cancer (i.e. management fees or     construction);

-Paid a total of over $18.3 million to the top 6 executives (average top executive     compensation was just over $3 million).

Of the 2,000 plus pages I reviewed on these nonprofit entities, there was only ONE case that I could find any information – any enumeration – where the nonprofit entities actually stated they financially helped families of children with cancer.  The Overlook Foundation (received grant from The Valerie Fund in 2015 of $441,012).  Form 990, for year ended 06/30/15, Schedule I, Part III, line 1 stated an amount paid for “assistance to families of cancer patients” of $38,997 for 123 recipients.

Uh, that is $317 on average to families of kids with cancer. (They spent more on reimbursing members for expenses of international medical missions - $997.)

Regarding the six nonprofit entities who received $135 million in grants, the following is itemized from the filed Form 990s for the years stated previously:

-Highest paid executive for Trustees of Columbia University is the Director in Investment Management whose compensation was $7.2 million.  This executive manages almost $6 Billion in equity securities. (Update: as of 12/31/18, Wall Street investments surpassed $10.5 Billion.)

-In 2012, Barnabas Health, a related entity to three of the nonprofit hospitals, paid its outgoing CEO, Ronald Del Mauro, a severance package worth over $21.6 million.  This was after he was at the helm as Executive Director of Barnabas Health for decades and after Barnabas had settled with the US Department of Justice for $265 million over allegations the organization had fraudulently inflated billing charges under Medicare’s outlier program.

-At Barnabas Health for year ended 12/31/15, among related entities, compensation to top 6 executives totaled $10.6 million, severance payments to 2 former executives totaled $2.8 million.
And there is more:
-According to Newark Beth Israel’s most recent filed 990, the nonprofit organization controls or is affiliated with 51 nonprofit organizations which provide services ranging from fundraising to property management to health care to childcare and staffing services.  Another ten organizations are taxed as partnerships, and another 33 entities are taxed as corporations or trusts providing such services as investments, financing, management, real estate holdings, and insurance.

-Children’s Hospital of Philadelphia (CHOP) is one of the largest pediatric cancer treatment centers in the NJ/PA area.  And in 2015, the CHOP Foundation received $150,039 from The Valerie Fund.  The following information was taken from Form 990s as of 06/30/18 filed by CHOP Foundation and Hospital:

-Compensation to the hospital CEO was $2.7 million.
-Severance package to the former CEO exceeded $13 million.
-The top five independent contractors – who were paid over $4.3 million - are investments bankers and marketing firms.
-The CHOP foundation reported unrestricted surplus of $1.3 Billion.
-The Foundation manages an investment portfolio totaling more than $2.1 Billion.
-Hospital profit (tax-free) for 2017 and 2018 exceeded half a billion.

As you can see most of the money donated to a local children’s charity (52% of expenses were grants) made its way into deep pockets and then into even deeper pockets.

So, one must ask, after following this money trail:  Where is the money to help families with children fighting cancer? 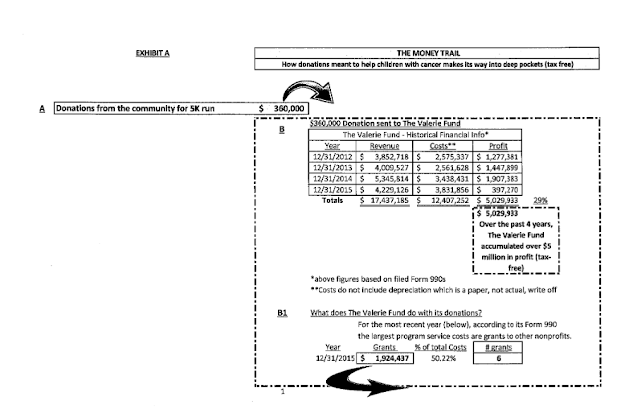 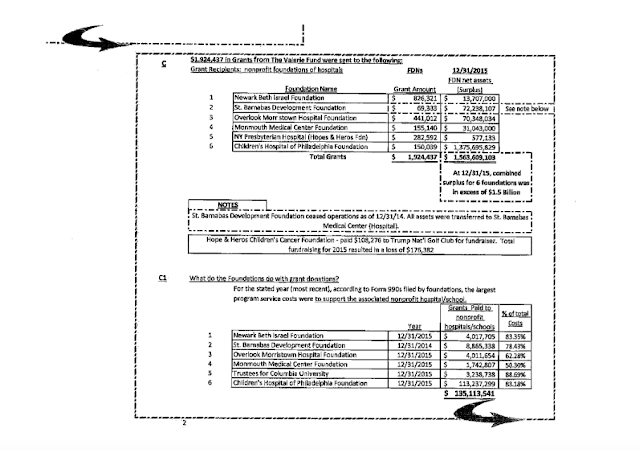 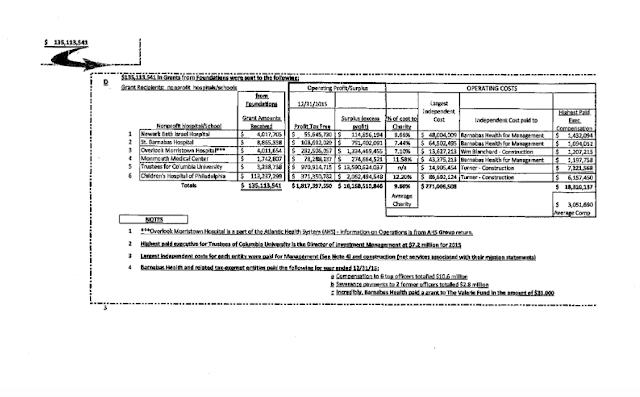