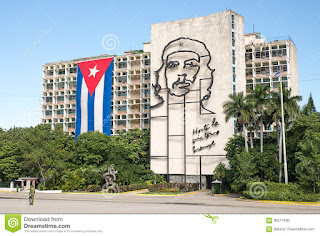 Cindy and Don chat about what is really going on in Cuba--presently and historically.

The U.S. is 99% responsible for the shortages and trouble in Cuba because of it's 60-year long blockade of the revolutionary government.

This is what the "progressive" Alexandria Octasio-Cortez officially says about Cuba, which exposes her complete devotion to Empire, despite her occasional, progressive sounding babblings to the contrary: 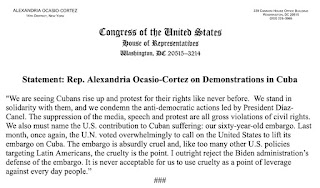 This is an article from Prensa-Latina

(Please forgive the inexact translation from the original Spanish)

The assumption that military intervention would fix Cuba only illustrates how the interests of the Miami dissidents are aligned with those of the U.S.

As protests erupted in Cuba over shortages of basic necessities, the decades-long illegal U.S. blockade on Cuba was no longer a part of mainstream media narratives. In 2020, media focus was on the Cuban contribution to the fight against Covid19 and how, despite the blockade, Cuba had still managed its internationalist approach, while manufacturing its own vaccines. For a brief period, talk about lifting the illegal blockade on Cuba was also part of the international narrative, even as the medical brigades were nominated for the Nobel Peace Prize.

Meanwhile, due to the blockade and Covid19, Cuba’s economy contracted further. Unwaveringly, the U.S. government also continued with its funding of anti-governments groups. Only the U.S. intentions are not democratic, despite what mainstream propaganda disseminates.

In April 1960, a memorandum under the heading “The Decline and Fall of Castro” partly stated, “The only foreseeable means of alienating internal support is through disenchantment and disaffection based on economic dissatisfaction and hardship.” Calling for economic deprivation, the memorandum further advocated for action which, “while as adroit and inconspicuous as possible, makes the greatest inroads in denying money and supplies to Cuba, to decrease monetary and real wages, to bring about hunger, desperation and overthrow of government.”

Given that the U.S. has never relented in its aggressive policy against Cuba, why is the imperialist narrative suddenly excluded from the greater picture of Cubans protesting against the existing shortages on the island. The U.S.’s economic sabotage of Cuba is well documented and for 60 years, the Cuban people have suffered the effects of U.S. foreign policy against the island, particularly when it comes to restrictions on trade. Repeated non-binding UN resolutions to lift the illegal blockade have not wrought any change in this regard. The near unanimous agreement at an international level that the U.S. blockade is harming Cuba is up against imperialist foreign policy, which the mainstream media takes and leaves, depending on which narrative best suits its interests.

U.S. President Joe Biden has not been particularly forthcoming about Cuba until now, biding his time, it seems, until an opportune moment to build upon the Trump administration’s foundations. With Cuba still on the U.S. terror sponsor list, and no effort to rescind any of former U.S. President Donald Trump’s policies on Cuba, Biden is now playing the humanitarian card to foment political unrest.

The White House statement describes Cubans “bravely asserting their fundamental and universal rights.” Undoubtedly so, but not in line with the imperialist designations for the island. If the U.S. has not relented in its repressive tactics against Cuba, there is nothing to suggest that the people would trade one rule of law for another that has sought their downfall, to reconstruct Cuba as the U.S.’s playground reminiscent of the days before the Cuban revolution.

So after upholding Trump’s policies, not to mention the illegal blockade, Biden stated he would be prepared to offer humanitarian aid for Cuba and “to give significant amounts of vaccine” if an international organization would step in. This after Cuban has successfully manufactured its own vaccines which rival both Pfizer and Moderna in terms of efficacy.

Calls for foreign intervention from Cuban dissidents in Miami are adding to the hostility against the island. Would the media think back to the CIA-sponsored assassination attempts on Fidel Castro, and the terror attacks against Cubans, and consider the calls for military intervention in light of decades of failure to bring Cuba under imperialist designs? “We hope that in 2021, President Biden can fix what Kennedy broke in 1961,” Cuban exile Orlando Gutierrez-Boronat stated.

The Miami assumption that military intervention would fix Cuba holds no ground, besides illustrating how, decades after the Bay of Pigs invasion, the interests of the anti-revolution dissidents in Miami are aligned with those of the U.S. The logical step would be for the U.S. to end the blockade and let the Cuban people who have not betrayed the island for the U.S. chart their course.

(when Obama was president)