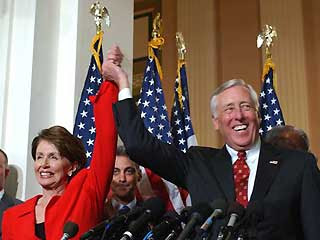 It, apart from Senator Joseph McCarthy, investigated Bolsheviks and communists and many other "subversive" organizations and people. There is nothing in the Constitution, as far as I know, that prevents one from being a Communist, but people’s lives were ruined because of this committee, and the committee even went as far as shaping the movie industry, and of course frightened many people into un-American silence.

Today, an op-ed that was “co-written” by Nancy Pelosi (House Speaker) and Steny Hoyer (House Majority Leader), which was more than likely written by an overworked staffer, called anyone who is protesting at the Healthcare Town Hall meetings: “un-American.” The person who advised this, should be summarily fired…with all due haste.

I don’t agree with a single word that is coming out of the right-winger’s mouths. Obama is not a socialist and the Democrats are not socialists, they’re fascists, and even though I think the Healthcare reforms are a bad idea for other reasons, I support the right of my fellow Americans to speak as loudly as they want and put forth their message any way they can.

Even though I know that most of the Town Hall disrupters do not or did not support my right to do so---I have been escorted out of many hearings or meetings---but I support any American’s right to expression, as long as it doesn’t involve hate speech. Hanging a Congressperson in effigy is not hate speech---it’s protected free speech---just like when Bush was hanged in effigy many times by the other side.

I know how difficult it is to get your voice and your opinion heard as a mere citizen in Congress if you don’t come to the table with millions of lobbying dollars. I have been kicked out of meetings and arrested by as many Democrats as I have Republicans.

Always putting corporate interests over human interests (like Pelosi and Hoyer do) is traitorous; but writing an op-ed to discourage and condemn protest from two of our leading “protectors of the Constitution,” (yeah, right), is downright unconscionable.

“Un-American” behavior should be defined as killing people or torturing them in far away lands, or giving trillions of dollars to bankster bastards for destroying the economy, or forcing the USA PATRIOT ACT down the throats of Americans without even reading the freaking legislation. How about traitorously allowing the confessed criminals of the Bush administration go free without accountability? That sounds downright "un-American" to me when this country's prisons are bulging with petty criminals---why let the big fish swim off?

There are so many things that our mis-leaders do that should fly in the face of morality and decency…yet fly under the radar screen, or are just blips that are soon forgotten. Volumes could be, and should be filled with government treachery.

Nancy, go home and attend to your posh Robber Class receptions with weekends at your vineyard, and Steny, go do what ever you do. We don’t need you slimy criminals defining what it means to be “un-American,” you both reek of the stench of blood and corruption.

Leave Americans alone for being American---you are the ones that are un-American.

Like Truman (who dropped two atomic bombs on Japan) said of HUAC when he was out of office: "the most un-American thing in the country today."
Posted by Cindy Sheehan's Soapbox at 4:27:00 PM