MYTH AMERICA II: 20 GREATEST MYTHS OF THE ROBBER CLASS AND THE CASE FOR REVOLUTION 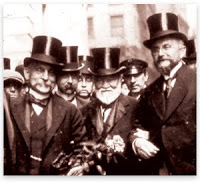 After touring for four months in about 40 cities with Myth America ONE, through my interactions with thousands of people, I realized that I had barely skimmed the surface of the Class War topic.

Now with job loss at record rates and USAians being evicted from their homes, or having their homes foreclosed on at a rate of one every 7 1/2 seconds; with the wars raging hotter and hotter, and with the establishment giving itself prizes for carnage, after a whole lot of work, Myth II is just about ready to be sent to your email box.

MYTH AMERICA I exposed and dispelled 10 MYTHS. MYTH II exposes and dispels 10 more to round out the subject. MYTH II is broken up into two parts: FOUNDATIONAL MYTHS and OPERATIONAL MYTHS and gives more solutions to the grassroots revolution of values that MYTH I proposed.

MYTH AMERICA II is priced at 17.00; 2.00 of which will go towards OMEID International that operates an orphanage in Afghanistan.

To order MYTH II, go to your paypal account and put: Cindy@CindySheehansSoapbox.com for the receiver's email address and put MYTH II in the remarks, and if you have MYTH I, then also put the third word on the top of page 59.

If you want to send a check, make the check payable to Cindy Sheehan and mail it to:

don't forget to include your email address and the third word on the top of page 59 if you already have Myth I.

EXCERPT FROM MYTH II:
from the MYTH that ONE PERSON CAN'T MAKE A DIFFERENCE

On August 3rd, 2005, I decided to go confront George Bush on his vacation in Crawford, TX…I decided to go and try and ask him a simple question: “What Noble Cause, did my son die for?”

I was there on August 6, with six other people, a few lawn chairs, one flashlight and a 5-gallon paint bucket to pee in…and an ice chest filled with water so we wouldn’t dry up and blow away in the constant heat…(have I mentioned it was hot that summer?) Whoever came later, came later…there were no think tanks, advisers, or large support staff that planned, or carried out the initial action.

What if I had remained in my air-conditioned Vacaville home paralyzed with fear and anxiety over being just one person? Or, what if I had put my energy into the next election? First of all, my fear of anything ended the day the Robber Class killed my son in Iraq, and secondly, we have had two elections since then which elected more Democrats with ZERO positive change in any direction.

I never envisioned or even imagined that my single idea, made singly by one single person sitting by myself in my Vacaville living room would have such an impact. We never know when one single act or person will grow to large actions, sometimes we never do know because individuals remain paralyzed out of fear that they don’t have any power, or out of fear of their own power.

The revolution that I am calling for is a non-violent revolution of "values." The same kind that Martin Luther King, Jr was calling for the year before he was assassinated.

Join me in this Revolution...buy Myth America II!

MYTH AMERICA II is only available online in PDF format.

If you would like me to send you a signed cover sheet of the book, please make a donation of