Where Have all the Flowers Gone? by Cindy Sheehan 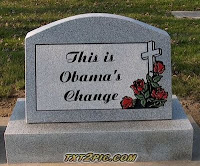 Watching Obama salute a coffin at Dover Air Force Base with all the pomp and circumstance of US Military worship filled me with disgust and sorrow.

Disgust because the White House PR apparatus went into full swing to find a family that would allow their loved ones’ coffin to be photographed in a scene that reminded me of George Bush’s landing on the deck of the Abraham Lincoln aircraft carrier on May 2, 2003 wearing a pilot’s suit and a codpiece.

Why did Obama do this? To soften the blow, of sending more troops, for a gullible public that wants to believe someone like Obama could give a crap about the cannon fodder he condemns to pointless death?

Being the Commander in Chief of the United States Military has only meant one thing for the past sixty years or so: being the tool of the War Machine. And even though a tool has no say in whether it is used to build or destroy, did Obama have no shame when he went to salute the coffin of a young person that he (the buck stops here) killed? Does he not have the courage to sign the orders to start withdrawing our troops from these wars that were begun by the War Machine when his predecessor was in office, but roll bloodily on while he wears the imperial mantle of carnage?

Sorrow because my son came through Dover Air Force Base on his last trip home from military service.

Casey was in the Army for almost four years before his country murdered him in Iraq.

Before Casey was killed in an ambush in Sadr City, Baghdad on April 04, 2004 (Palm Sunday that year), his homecomings were always cause for great joy in the Sheehan household because we all missed him so much. I would prepare everything that he loved to eat; I wouldn’t crab at him if he stayed up all night playing games on the computer; in short, I would spoil him as much as I could.

The Friday after he was killed, (Good Friday that year) one of our friends came over to tell us that Casey’s coffin had just been removed from the belly of a C140 at Dover, he knew this because his son-in-law had just removed it. Then we got a call from our “Casualty Officer” who told us that Casey’s shell would be flying home to San Francisco and we made arrangements with the funeral home to go pick it up the next day (Holy Saturday).

We drove to SFO, following the hearse, in a limo provided by the funeral home. Obviously, there was no joy or laughter in the limo on that trip to pick up our dead son/brother/nephew/friend.

After we arrived at the loading dock of United Airlines, we literally had to sit on a curb while we waited for Casey’s body to be brought from the airplane. He was brought to the hearse in a cardboard box and offloaded onto a conveyor belt by a forklift. There was no color guard, there was no band playing, there was no saluting-idiot Commander in Chief---there were only his brokenhearted loved ones---in shock and in pain that has no measure or end.

Sorrow for the mothers and other loved ones of those killed. Have you ever had to pick out a gravesite for a child? It’s disordered to bury a child, but demented to have one killed in another US Corporate war for profit.

Sorrow because of the devastation these wars are causing all over the world: from a loading dock in San Francisco to the target of a drone in Pakistan or the scene of another bombing in a crowded Iraqi marketplace.

When will we ever learn?