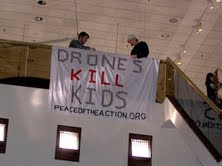 This past Saturday, about 175 people joined us at CIA HQ in Langley, VA for a protest against the CIA’s usage of this deadly drone technology in North-West Pakistan that has been responsible for killing over 100 times more civilians than “suspected” al Qaeda or Taliban militants. After a story came out from the Associated Press that said we were out there protesting the fact that CIA drones targeted the “al Qaeda and Taliban,” (AP printed a "clarification) I have received dozens of emails attacking me for supporting "terrorists" over the lives of our military.

First of all, we DO protest the fact that the CIA is involved in, not "para-military" missions, but full-on military missions in Pakistan. Violating sovereign territory and assassinating whomever the CIA (in collaboration with the Pakistani government and the ISI) feels it should murder, is wrong no matter how false US patriots want to spin it. Barack Obama has green-lighted the expanded CIA program but wasn’t there an outcry from the faux-gressives when we learned that Cheney wanted to used the CIA as his own death squad?

We know that there has always existed at least two systems of justice in the United States, but since 9-11, what many of us believed was a semi-transparent system of laws that offered at least some bare protection to the accused has now been replaced with an arbitrary code of behaviors that has tacit approval of most Americans, because "they" are keeping us “safe.”

Overt, extra-judicial and extra-legal killings by the Central Intelligence Agency are NOT okay. My inbox piled up with hate mail telling me that I am a “moron” (among the nicer things) because the CIA Drone Program “saves the lives of American troops." Really? Because American troops are now invading and occupying the Swat Valley of Pakistan? When did that happen? No, the CIA Drone Program is just a more expeditious way for the assassins to murder people. This program has saved not one American troop, yet I am sure the terror it spreads and the revenge factor flying drones over people's heads and dropping Hellfire missiles on them foments have been major impetus for widespread hatred of the US.

Many of my hate mails (in direct response to the AP story) also tell me that the use of drones could have saved my son’s life. Let’s dissect this argument. Firstly, what could have saved Casey’s life would have been if the US never invaded and occupied Iraq in the first place. After years of manned bombings where not one US troop was killed, but thousands of Iraqis were, the country was decimated and devastated. George Bush and his administration thought a new invasion, one that went right up to Saddam’s doorstep would be a “cakewalk.” Bush estimated that not one American life would be lost and Rummy estimated that the misadventure would cost “$50 billion” paid for by the very people we were slaughtering by pillaging their oil fields. Now after a few trillion dollars and over a million US and Iraqi dead, do we really think that our government uses drones to “minimize” the loss of life? Life is cheap to the US War Machine and I would like to know exactly the point in time when our government became “pro-life.”

Even though we do oppose the CIA using drones on anyone—or anything—the overwhelming reason we went out to CIA HQ was the mere fact that innocent people get caught between the CIA’s drug/war lords and its goals of destabilization and democracy destruction.

For about every 20 misspelled, angry emails I get from false US patriots, I get one heartfelt email from a Pakistani thanking us for caring about them. It's about time someone did.

View videos of the event here

General Atomics builds the Predator series of drones and profits off of the innocent blood and terrorization of millions. The company also sponsors a drone exhibit at the Smithsonian Air and Space Museum in DC—Peace of the Action sponsored its own field trip there on this past Sunday.

Listen to this week’s edition of the Soapbox, which came out on Sunday the 17th, as Cindy chats with Matt Gonzales (former president of the SF Board of Supes and VP Candidate); and Brother Larry Pinkney of the Black Commentator in an evaluation of the State of the Union after Obama’s first year as president.