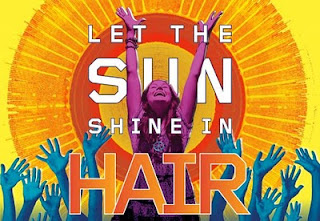 I went to a performance of the musical, Hair, last night in New York City. I wonder how I would have reacted to the show before Casey was killed—before the insanity of war became my “new normal?”

The original production of Hair debuted in 1967 when the Vietnam War was increasing in carnage and the counter-culture opposing it was also growing. I was 10.

I remember hearing The Age of Aquarius covered by the 5th Dimension for the first time and not even knowing my Zodiac sign—I quickly discovered that I am a Cancer and everything that meant. The Beatles had already mainstreamed long hair, so when the Cowsills sang the main song from the musical, it appeared cute and funny and only because some of the more provocative lyrics were left out.

Probably my favorite song at the time was Three Dog Night’s cover of Easy to be Hard. As a 10 year old girl living in a predominantly working class, but white suburb of L.A., I never could have imagined how significant these lyrics would become in my own life 40 years later: “Especially people who care about strangers, who care about evil and social injustice; do you only care about the bleeding crowd; how about a needing friend, I need a friend.”

Like I said, I was 10. I was interested in The Beatles, The Monkees, softball and my elementary school crush, Tommy Enders. I sympathized with the anti-war movement at the time without really understanding it, but I knew it was seriously cool. The hype about Hair was the open drug use, open love and full-frontal nudity.

But 42 years later, I went to the program last night knowing that Hair was also about the counter-culture that rejected the establishment and war. I knew that a main character gets killed in Vietnam at the end. I was fully prepared for that. Almost six years after Casey was needlessly murdered in Iraq by his country’s corrupt foreign policy, I can sometimes get through entire days without crying, even though the pain of his loss is constantly with me.

At the end of the musical, Claude Bukowsky dies and the cast sings, “Let the Sunshine,” with anger and sorrow on their faces—not the joy that such a happy sounding song would seem to elicit. The cast leaves the stage singing, Claude is lying on the stage in his dress uniform, and I heard a few sniffles in the audience, although tears were streaming down my face. Then, in true American fashion, the cast comes back—cut to happiness—Claude is alive and dancing—and we are all supposed to go on the stage and dance and pretend like everything is okay.

I was sad up to that point, but in a poignant way. The performance truly captured how fucked-up war really is—but when the cast and audience started dancing with joyful abandon, I began to panic and had to leave the theater. I shocked myself in the lobby when I stopped to look in a mirror to put my hat and scarf on—and staring back at me was a “normal” Cindy—there was not one hint on my face of my shock and horror and that’s when I burst out sobbing. How can it be possible to be so broken inside and look so calm on the outside?

War is still the most fucked-up, mentally deficient and morally bankrupt activity that was ever developed by mankind, and most Americans don’t even think about that fact for even a few seconds everyday. And if they do, don’t worry—dancing is right around the corner.

In the 42 years since Hair debuted, the Sunshine is growing dimmer and We the People must take some responsibility for allowing the War Machine and its War Parties to pull black hoods over our heads and accept, as normal, activities that are so fundamentally disordered they make Napoleon look sane.

Hair is also about a "Tribe." Websters Dictionary defines "tribe" as: a group of persons having a common character, occupation, or interest.

To survive as the Tribe of the Human Race, our common interest must be peace and the collective rejection of the establishment's wars. Is this a futile endeavor, or do we have a real chance this time?

But first, we must recognize the fact that we are all in the same Tribe.

I give the production, cast, message and performances an “A+,” I give our nation an “F-.”

For more information about the show, go here: