Camp is Gone, but not for Long! 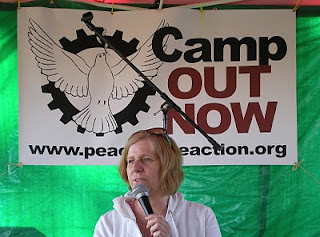 Well, our great experiment didn’t go as well as we planned here in DC. My vision was a Peace Camp that would serve the needs of the campers as far as housing and food were concerned (that part worked) and the campers would then commit aggressive acts of civil resistance (that part didn’t) in the nation’s capital to shut down the violent military-corporate empire that we live in. In the opinion of members of Peace of the Action, living here in the US gives us special responsibilities for stopping it.

Anyway, we had hundreds of people come through camp over the week that we were allowed to keep it up. Dozens were college students that worked very hard while they were here and we were sorry to see them go back to their schools after break. The thing that we were hoping that would happen and never did—was that hundreds of people would stay and help us claim the camp as a permanent presence on the mall.

It’s true that the Park Police thwarted us and watched (and photographed) every move we made. However, if we had the numbers, we could have taken a more credible stand against the repression of our rights. When the Park Police came out and shut down camping on the first day—part of our name “Camp” was shut down, too.

We have wonderful organizers and I know I worked as much as is possible for one person, but we had to face facts that the will is just not in our fellow Americans to sacrifice a few creature comforts to create true and lasting change. It’s so much easier to vote for a smooth-talking snake oil salesman than to roll up ones sleeves and do the dirty, hard, yet gratifying work of empire change.

Even though we had some rough times in DC with the Police State and Camp OUT NOW is physically gone (for the time being), we are not giving up the spirit of shutting down this town for Peace.

Congress is once again taking up war supplemental funding. We can’t just make phone calls and write petitions—we must organize and be in their faces here and in our home districts demanding that not one more penny be spent on killing and maiming people.

By the way, not only was our demand to meet with President Obama not granted—three of our Camp OUT NOW volunteers (including myself) have been given stay away orders from the White House.

We tried to get into the Senate Appropriation’s Committee meeting today at the Capitol and we were followed and harassed the entire time and in the transparent age of Obama, the hearing was closed to us citizens, anyway. I was able to watch the rerun on C-SPAN 3 and I can tell you all one thing, these wars are planned to continue indefinitely. I am not okay with that.

To take advantage of the energy and enthusiasm of our young people, we are planning on returning in June to set up Camp and start our actions again.

So we will be keeping the spirit of the Camp alive until the students get out of school and, hopefully, we can make a go of it in the summer.

It’s really up to you—we have laid the foundation, now it’s your turn to be the builders.

As always, go to www.PeaceoftheAction.org for more info.