Whose Streets? (Our Streets between 1pm and 4pm With a Permit) 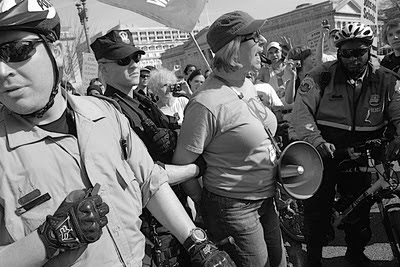 On the 7th commemoration of the illegal and immoral invasion of Iraq, there was a rally and march in DC sponsored by the A.N.S.W.E.R. coalition that was attended by about eight thousand people.

For quite awhile, I have been having problems with marches on Saturday, anyway. It seems like we march past empty buildings and shake our fists at them and promise that if those empty buildings don’t change their ways, we will be back next year to do the same thing. The arrests are symbolic and don’t shut down anything, except in the case of large arrests, where the police stations are busy for a few hours.

As far as I know, there were no large civil disobediences scheduled for last Saturday’s rally, but some coffins were built on the sidewalk in front of the White House and four protesters decided to lie down near them and not move. Two of these protesters were good friends of mine: Elaine Brower of Military Families Speak Out and Matthis Chiroux of Iraq Vets Against the War. When I went over to check the action out, the four were begging the hundreds of others surrounding the protest to join them. The four were cordoned off with barriers and crime scene tape.

I began to plan a way to join Matthis and Elaine when I went to the front of the barrier and saw my dear friends, who have always been there for me, lying on the sidewalk by themselves. Just as I was figuring out how to get over the barriers, the section I was at collapsed onto the sidewalk and I took the opportunity to step over hoping that dozens, if not hundreds, would follow.

As soon as I crossed the barrier, I was slammed by a couple of cops, handcuffed and then actually run around the front of the White House while the cops tried to find a paddy wagon to stick me in—about 50 people were running with the cop and I, yelling: “Let her go, let her go.” When the officer and I finally got to the paddy wagon, I was surprised to find that only two others had followed me. One other crossed the line to bring our detained numbers up to eight.

During my speech at the rally, I iterated the importance of “throwing our bodies upon the gears” of the machine, as well as marching—I got a huge cheer and during the march the participants chanted: “Whose streets, our streets.” Eight detainees? Apparently the streets are only "ours" when we have a permit--god forbid we take them when the event is not permitted by the Police State!

Why, when the barrier was compromised, did more people not follow us to actually put their beliefs into higher relief than merely marching in a circle on Saturday? While we were being (tightly) handcuffed and loaded onto the hot paddy wagon, the crowd of on-lookers chanted, “This is what hypocrisy looks like.”

I was, to say the least, very disheartened that hundreds of people didn’t join us. Watching the video of my “crossing over,” you can see a couple of people go over and then run back when the police come—but most of the people step back like the downed barrier is a livewire.

After a bumpy and sweaty ride, we eight arrive at the Park Police Station in Anacostia. As we were being processed, it started to become very clear that some of us were going to be detained until Monday. Ultimately, two of us were released and six of us were held. The two that were released were from DC and those of us held were out-of-towners. Immediately, we knew this explanation was total b.s. because I have been arrested in DC about 13 times now and I have always been from “out-of-town,” and have never even been held overnight, let alone two nights.

Was it a coincidence that Camp OUT NOW had two major actions over the weekend to try and hold our campsite that I missed due to being jailed? I don’t think so

Well, those two days were some of the most miserable days of my life! We were taken to a lock-up and Elaine and I were put into a freezing room and I had a t-shirt and flip-flops on, being unprepared to be arrested. For four women, our cell had one cement block bench that was about 7-8 feet long, so at least one of us always had to be on the stone-cold floor. Sleeping was fitful as it was very chilly all night—and very noisy!

Thirty-six hours, and eight bologna-like and cheese-substitute sandwiches later, we were taken to the court for our arraignment and stayed in that cell for seven hours and were finally released at 5pm after we all pled “not-guilty” and were scheduled for a trial on June 9th.

Basically, six of us stayed in jail for 50 hours for an offense that ends up to be the equivalent of a traffic ticket and we even had to go to traffic court to be arraigned. I am positive that everyone in DC who gets a traffic ticket and is from “out-of-town” does not have to stay over night. Then, I found out that the penalty for my charge “Crossing a police line” doesn’t even carry any jail time. I spent two nights in jail on an offense with no jail time! The maximum penalty is $300! Boy, I will be even more pissed if I go through a trial and have to pay $300 dollars after I have already spent two nights in jail.

To make matters even worse, I was the only one who was forced to come back for a trial even though Elaine has more DC arrests than I do. The other seven have chosen to go to trial with me, but they were given the option to “pay and forfeit” which means to pay the fine and forfeit your right to a trial.

The icing on the entire crappy cake came when the eight of us were given a “stay away order” from the White House—I asked the Judge how could that be legal because we weren’t convicted of anything, but the Judge assured me that conditions could be placed on our release. I also think this is very suspicious considering our Camp OUT NOW actions were focusing on the White House.

Many times during the 50 hour ordeal, Elaine and I were asked if we thought it was “worth it,” to go through so much hardship for so little gain.

My answer is, first of all, if more people crossed the line with me, we wouldn’t have had to stay 50 hours in jail and I was very upset that we were left to hang out to dry like that. Secondly, the war didn’t end while we were suffering—but knowing how awful it is to spend so much time in jail and be treated like one is a serial killer and not a protester—I would do it again and again, as I have.

There are literally billions of people suffering all over this planet due to my nation’s militarism and greed and I know many people would have traded places with me in a heartbeat and think the conditions were pretty damn good.

AND this never happened to me when Bush was president.

UPDATE: Three of us went to pick up our property this morning at the Park Police station and as we were being jacked around, an officer named Thomas (Badge number 628) told me that if I “stopped getting arrested” I wouldn’t have to go through all of this.

I said: “when the wars stop, I will stop.” He actually then told me: “The wars will stop when we nuke them and take their oil.”

I wonder why they are called “pigs.”