"We Pledge Resistance to the Empire" by Cindy Sheehan 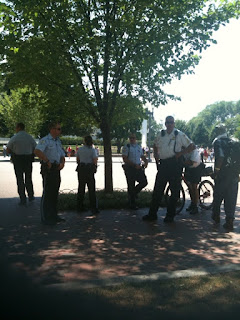 “Ms. Sheehan, are you aware that you have a stay-away order from here?” The big, burly cop said to me as he crossed Pennsylvania Avenue to confront our small protest of intrepid peaceniks in Lafayette Park.

“Yes, and I am also aware that I am not violating it right now,” I answered.

That “stay-away” order was imposed on myself and five other people after we were arrested in front of the White House on the 7th anniversary of Shock and Awe this past March. I was just wondering if any of the law enforcement on duty even knew that I had a stay-away order--we were there only for about 5 minutes before I got my answer.

This nation is supposed to have been founded 234 years ago today on the principles of freedom. My son was supposedly killed in Iraq defending those freedoms, but if I crossed the imaginary line of oppression and suppression on the sidewalk of Pennsylvania Avenue, I would have to go to jail for a mandatory sentence of six-months—and the police were fully aware of that fact. At one point, we had at least a half a dozen cops facing us and we only had about twice as many protesters.

This is a strange holiday anyway. We are supposed to honor the “founding” of a nation that was inhabited by millions of people at the time it was “discovered.”

The theme for our protest today was “Declare Your Independence from Oil” day and we passed out fliers to the tourists outlining the problem of this country’s addiction to petroleum and using our bullhorn to do chants like: “Drill, baby, drill; spill, baby, spill; kill, baby, kill.” I realize that this is a “holiday” and most people were coming to Lafayette Park as tourists, but it’s obvious that war, environmental devastation and economic oppression do not take holidays. People died today in the Middle East and Asia and millions of gallons of oil gushed out of the Oil-cano into the Gulf of Mexico as families clad in their Old Navy flag t-shirts started at us with anything from confusion to outright hostility.

It is really pathetic that even in the midst of a cataclysm of such an enormous magnitude, so many people seemed to be so unconcerned and apathetic. Many of us traveled thousands of miles to be here in DC to try and throw some light on the violence of this Empire and just a couple of dozen also showed up to be with us.

At one point, I had the bullhorn and I made an observation that the last time I was on the sidewalk next to the White House merely exercising my right to free speech and to peaceably assemble, I spent 52 hours in jail and two gentleman yelled: “Go back there.” Wow, in contrast to the couple that brought their two young sons to protest with us and “witness free speech in action,” wasn’t that a great message to send your children on the 4th of July—that it is “okay” to criminalize dissent?

About five hours after we arrived at the Park, a man on the street in front of the White House yelled that he “had a bomb.” The cops had the man (who had no shirt on and clearly had no bomb) in rapid custody and then they cleared the park in a very harsh way—even pushing a few people who had the nerve to ask why they had to move. I thought it was interesting that many of the families there from near and far, were shocked—shocked, I say—that they could be treated like common criminals, even though they hadn’t committed any crimes. We were barred from the park for over an hour, and many people who were angry at us for having a protest just minutes before, joined us—and we blocked 15th Avenue by H with a few of our newcomers. Some of them even promised to return tomorrow for our protest called: “Don’t Attack Iran you Effing Psychos.” (9am to 3pm in Lafayette Park).

One of my bullhorn chants today was: “We pledge resistance to the Empire.” I know I will be resisting, even if the crowds (that were as high as hundreds of thousands of people in 2005, to 24 today) dwindle down to just me.

If you are reading this and if you can make it to DC, please join us. We do live in a psychotic empire and the only thing that matters to the leaders and corporations is the bottom-line and the top dollar.

We need you all to help us make humanity the bottom-line.

One last observation before I close—a highly fortified paddy wagon filled with heavily armed and armored robo-cops was parked across H St from our relocated protest.

One man went up to one of our comrades, pointed at the robo-cops and said: “those are REAL Americans.”

Now, doesn’t that just say a whole lot about our culture today? People who dissent from the status quo, like the “founders” of our country, are NOT real Americans, but those who are armed to the hilt and ready to crack some skulls open are Real Americans?