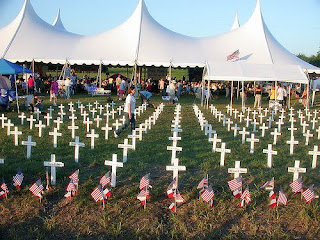 My reflections on the 5th Anniversary of Camp Casey

Before my son, Casey, was killed in Iraq on April 04, 2004, I was a mother of four, worried about all my children—but especially the one who was going to be deployed to Iraq—sometimes working as many as three jobs to survive, and only peripherally aware of the harsher realities of living in an Empire.

When Shocking and Awful rained down on Iraq, the military “operation” was then called: Operation Iraqi Liberation—but the geniuses in the War Selling Department figured out that the acronym was too obvious, so it was changed to Operation Iraqi Freedom, which is the name that was on all of my son’s paperwork and medals after he was killed.

Backs then “enhanced interrogation methods” were also known as “torture” while this nation was fighting a “War on Terror.”

Since a Nobel Laureate has risen to the top of the Imperial Dung Heap (IDH), he has done good and well, as Nobel Laureates should: He has only changed the names of things at the directive of the War Selling Department. The “Global War on Terror” has been renamed to: “Overseas Contingency Operations”—whatever the hell that means, but the vagueness is intentional. The Empire is expert at ill-defining missions because if the missions were defined with precision, there would naturally have to be an end when the mission is really “accomplished.”

Back sometime after the Nobel Laureate was installed on top of the IDH, the mission that killed my son was renamed: “Operation New Dawn.” So every single one of our troops and Iraqis that have been killed since Obama’s reign have been killed in something that resembles dish-washing detergent and most certainly the selling of it. “Operation New Dawn: New and Improved with more Lemony Freshness—and, boy, does it cut through grease!” Grease is the only thing that Operation New Dawn cuts through, though—since many of my fellow USAians want to believe that Obama is the “New and Improved” George Bush.

Now, Obama has taken back a promise to have “Combat Troops” out of Iraq by September 1st of this year and now has pledged to have them out by the end of 2011—but of course, he has again redefined the mission and the troops are now on a “support and train” mission instead of a combat mission, so the Bots will believe that there is a new “Mission Accomplished.” There will be some troops movement and more empty rhetoric about this as the next presidential season is rapidly coming to assault us with more Madison Avenue Trickery. And people on the so-called left and so-called antiwar movement were upset with John McCain when he said that troops would be in Iraq for “100 years?” Well, that is upsetting to me, also, but troops will be in Iraq for 100 years because WE only come out to fight when a Republican is in office and it is apparent that The Empire can tenaciously hang in there until the next cycle when a Democrat takes the “con” of The Empire and neutralizes the “Left” for another four to eight years.

Since I camped in Crawford, Texas beginning August 6th, 2005—there has been little to celebrate and virtually no progress in a progressive direction regarding any policy.

Bush’s troop “surge” in Iraq that was bought and paid for by Pelosi’s Democratic Congress only “worked” because just about everybody that could be killed or displaced in or out of Iraq has been. In 2003, Iraq had a population of roughly 25 million and about 5 million of those have been killed or displaced—that’s 1/5 of the population. Devastating figures—that would be comparable to 60 million USAians being killed or displaced! Significant and tragic figures that mean very little to most daily consumers of what passes for news here in the U.S.

In the Summer of 2005, BushCo and its wars were still maintaining slight popularity in polling (done by corporate sources), but there were millions of people in this nation and probably billions on the planet, that were against the wars and BushCo. Camp Casey captured the imagination and excitement of 15,000 who traveled to Crawford that August to be with us and tens of thousands throughout the world that held vigils in support of us and started their own Camp Caseys in solidarity with Camp Casey in Crawford.

Right after Camp Casey, we had many people travel to New Orleans to help with the hurricane relief and a Veterans for Peace bus took 5 tons of left over supplies after we closed Camp in August of 2005. We held a march and rally in DC on September 23rd that had over 500,000 participants. Still, everywhere I do travel people tell me that after my example, they became active in political, antiwar, or social justice movements.

So why are we still in too many wars?

Too often still, I receive emails from those on the so-called right that email me and call me a “hypocrite,” “Democratic shill,” “Obama tool,” or other names indicating that they are under the false impression that I have retired since Obama became president, but nothing could be farther from the truth—I have NEVER stopped and I don’t care who is the Corporatist in Chief—I never will until the wars are over and this nation has a saner foreign policy and a more humane domestic one.

The reason we still have wars is that, what I call the Robber Class, perpetuate Myths that keep us tied to them in very sick and harmful ways and the “antiwar” energy turned out to mostly be anti-Bush energy. Bush is gone, but his crimes remain.

To me, everyday is exactly like a nightmare that I can't wake up from. The powers that be lied to the world about Iraq having weapons of mass destruction and lied about some kind of connection between Osama bin Laden and Saddam Hussein and then admitted to lying--and the entire world yawned and the killing continued and continues. The kicker in all this is that I have to live each and every day for the rest of my life knowing that my son died for these lies and that the people who have perpetrated these mass crimes against humanity walk among us freely and, as a matter of fact, are doing quite well for themselves. It's totally mind blowing to me and I get accused of being "angry." The thing about Casey dying in a war based on lies is because his recruiter lied to him. Our entire Imperial structure is constructed on lies and functions off of heartache.

Camp Casey was a miracle to me and I will never forget that summer and the high we were on thinking that we were going to finally make a difference but the Empire knows how to neutralize those movements and we were distressed that the energy was inappropriately used to elect Democrats. But five years later, I am older and wiser and the proud grandmother of three grandbabies two years and under that have given me more love and joy than I thought was still possible in my life. The babies have also given me a renewed sense of urgency and commitment to making this planet a better place for all the babies.