War Always Was, Still Is, and Always Will Be a Racket by Cindy Sheehan 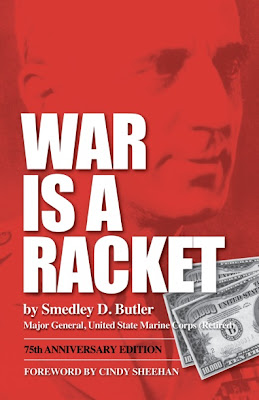 Seventy-seven years ago, Major General Smedley Darlington Butler, Marine Corps, gave a speech entitled, War is a Racket. What made this speech so credible, if not surprising, is the fact that Smedley Butler was the highest decorated Marine of all time. Marines all over still learn about him, but they aren’t taught that he came from Quaker roots and began to castigate the U.S. and its wars of aggression after his retirement from the Marines.

In about March of 2005, I received an email from a person who had read one of my articles and he sent me a link to the treatise, War is a Racket. By the time I first read Butler’s work, I didn’t need any more convincing that Casey died for no reason except profit, but after I read it, I began to understand that the concept of “good war,” was a bogus one. Indeed, Butler says this in the first chapter:

It seems like every generation, more or less, in the U.S. we wage a significant war. My generations’ “War on Terror” was Vietnam. Smedley Butler wrote War is a Racket between the “good wars” WWI and WWII.

What also makes this treatise so incredible is that in 77 years since the original speech, nothing much has changed. If you just change some of the names to the current crop of culprits, it is eerily identical to today.

Peace of the Action and Cindy Sheehan’s Soapbox is proud to offer a 75th Anniversary Edition of War is a Racket (which was published first in treatise form in 1935) with foreword by Cindy Sheehan—and personalized and autographed by Cindy Sheehan for only $10 (shipping and handling included).

The booklet contains a short bio of Major General Butler, and a short expose´ of the Military Industrial Complex—it is ideal for students, classrooms, living rooms, libraries, and peace libraries—anywhere that our children are in danger of being preyed upon by the Empire—which is pretty much everywhere these days. Military service seems to be the government’s new jobs’ program.

Discounts are available for bulk orders, email Joshua Smith for a quote: Josh@PeaceoftheAction.org