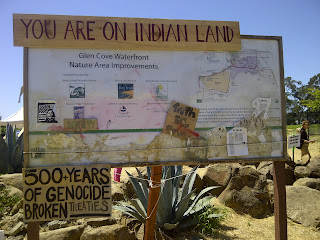 Recently, I had the opportunity to go to the Bay Area community of Glen Cove to be in solidarity with activists who are currently conducting a standoff with authorities.
At Glen Cove (in Vallejo, Ca), there is a struggle going on that few people have heard about. According to the official website for the struggle, www.ProtectGlenCove.org:
Glen Cove is a sacred gathering place and burial ground that has been utilized by numerous Native American tribes since at least 1,500 BC. Today, Glen Cove continues to be spiritually important to local Native communities. It is located just south of Vallejo, California along the Carquinez Strait, a natural channel that connects the Sacramento River Delta to the San Francisco Bay. Glen Cove is known as Sogorea Te in Karkin Ohlone language.
The City of Vallejo (named after General Mariano Vallejo, a Mexican national who was a supporter of native American genocide and the takeover of California by the US) wants to take the 15-acre site—which has already been desecrated by previous local development, and make an unnecessary park out of it—further desecrating one of the few remaining Sacred Sites in California that has not been totally paved over.
The Greater Vallejo Recreation District (GVRD) claims that the land should be developed because it needs to be "enjoyed by all the citizens of Vallejo." Our native brothers and sisters counter with: “Every inch of Vallejo, indeed California, was stolen from us, can’t we have this 15-acres free from further encroachment?”
As of today (June 27), the stand off with the authorities that want to develop has lasted 75 days and the support has wavered between hundreds of supporters on special days and the few dozen I met there yesterday.
California, under Spanish, Mexican and US rule has a long and shameful record of treating our original inhabitants—bounties were even paid for the scalps of Indians—and they were called “savages?”
The holocaust of the native people here reached a fevered pitch after the Gold Rush, where an estimated population of 150,000 indigenous people was reduced to under 30,000--in 1851, California Governor Peter Burnett declared:

“[Unless the Indians are sent east of the Sierras] a War of Extermination will continue to be waged until the Indian race should become extinct…”
I realize that most people reading this never oppressed or killed a member of our original people, but we can stop this continued oppression by lending our support to their current struggles.
Go to the website to read more about it and find out how can you support the stand-off:
www.ProtectGlenCove.org
Posted by Cindy Sheehan's Soapbox at 10:03:00 PM