Plenty of Division, No Class by Cindy Sheehan 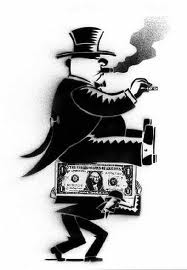 In 2008, when I was running for Congress against then House Speaker, Nancy Pelosi, the class divisions in this country became glaringly obvious to me. At that time, I realized that I had personally never been in the fabled “Middle Class” and for all my life I had moved fluidly in between the working-class and the poor class.
I, like most of us, was raised on the idea that the US was a “class-free” society—that we all had the same opportunities for wealth and privilege. When I go to other countries and say that this is still what many USAians believe, I always get hearty laughter as a response.
I was never a supporter of Barack Obama before and after his record breaking mass marketing campaign for president; but after he strenuously used his position as Democrat super-star to hound other Democrats into supporting the 850 billion bankster bailout in October of 2008, it was confirmed for me that Barack Obama was a servant of Wall Street and big business. I already knew he was a war jackal masquerading as the “Peace Candidate.” After he was inaugurated as CEO of Wall Street in 2009, his “stimulus package” was supposed to stimulate “shovel ready” jobs, but the only thing that has been shovel ready is the pile of manure he keeps hurling at us.
Now, two and a half years, too many more wars, many more jobs lost and homes foreclosed upon, Barack Obama, in the manipulative name of “compromise,” is showing a willingness to do what even George Bush couldn’t get accomplished: further gut the retirement safety net (not an “entitlement”) known as Social Security. After the Pentagon just received 615 billion dollars in a new appropriations’ bill, Obama, the Bizarro Robin Hood, wants to steal MORE from the poor so the rich won’t have to do what he is always asking us to do: SACRIFICE.
Whether it is sacrificing our young people to fight in Obama’s Robber Class wars for profit, or our elders having to sacrifice food, medicine, shelter and warmth, or our students having to forfeit a higher education, we here in the Robbed Class give up our rights, prosperity, and peace with barely a struggle.
I call the exploiter class, the Robber Class; president Hugo Chavez of Venezuela has referred to that "no class" level as the "los escaulidos" or "Squalid Ones." And, indeed, that they are: wasteful, lazy and greedy.
After my campaign in 2008 against the Queen Great-Grandmother of the Robber Class, Nancy Pelosi, I wrote what has turned out to be a very relevant if not prophetic book called: Myth America: 20 Greatest Myths of the Robber Class and the Case for Revolution. I wanted us in the Robbed Class to prepare ourselves for the coming devastating financial collapses in ways that remove ourselves from the parasitic (but sometimes symbiotic) Robber Class institutions and create healthy economies and communities for ourselves.
One of my favorite protest signs of all time reads:
They only call it a "class war" when we fight back.
Let's show those "you know whatters" what a class war really looks like. This "class war" requires a Worker's Renaissance and we can do it despite labor leadership and the bourgeois political parties. We have to do it!
Order your free PDF copy of Myth America.
Now.
The time has already passed.
Posted by Cindy Sheehan's Soapbox at 11:55:00 AM