Your Soapbox! It's Your Turn!

A soapbox is a raised platform on which one stands to make an impromptu speech, often about a political subject. The term originates from the days when speakers would elevate themselves by standing on a wooden crate originally used for shipment of soap or other dry goods from a manufacturer to a retail store.
Cindy Sheehan’s Soapbox is pleased and excited to announce our newest forum, Your Soapbox, for your articles, blogs, ideas, input and a place to share radical “lefty” ideas without having to wade through the quagmire of reformist support of a diseased system that has been identified as capitalism.
I began Cindy Sheehan’s Soapbox (radio show and blog) in early 2009 after my campaign for Congress against then House Speaker, Nancy Pelosi. Before I embarked on, and during my campaign, I had hoped that running against an alleged progressive with a far more progressive (leftist) platform which included (among other things) Peace Above All and People Above Profit, that the corporate media would sit up and take notice—of course, my desire for true change was only exceeded by my hopeful optimism and naiveté, and the media all but ignored my campaign.
In the same election which San Francisco chose the failed status quo over me, the US chose another slickly packaged corporate candidate to preside over the United Corporate States of America—Obama. Many people think that the 2010 Supreme Court landmark decision in the Citizens United v. the Federal Election Commission was the nail in the coffin of the US democratic process, however many of us know that this is a nation founded by the Robber Class to enrich the Robber Class and that Supreme Court decision in 2010 was just another one in a very long line of supporting profit over people.
Anyway, I started Cindy Sheehan’s Soapbox to keep the radical revolutionary voice for true change alive, and now, two and a half years later, we have collaborated to give you a chance to have your voice heard.
Your Soapbox was the concept of Glenn Parton who desired a place to share his ideas on socialist revolution without having to wade through posts upon posts on sites devoted to Democratic politics and politicians—which seem to whine and moan about the direction our country is going in without making the connection between Democrats being the same as Republicans in this rapid drive to destruction.
We the People must Declare our Independence from the Robber Class--and we have an unique opportunity these days with the escalating importance of the internet to share ideas and energy for a new revolution that shakes this nation up and turns it upside down for true revolutionary change. Social media has proven to be a good way to do that, but one must wade through Farmville, Mafia Wars and cute kitty videos to get to the meat of profound dialogue. Don't get me wrong, cute kitty videos have their time and place--but not on Your Soapbox!
Please sign up for Your Soapbox and participate in this forum. We would like to make it THE place for revolutionary discussion.

Thanks to Glenn Parton for his energy behind this and Scott Ford for being the technical genius to get this project off the ground.
CLICK THE IMAGE TO SIGN-UP for YOUR SOAPBOX
PLEASE SHARE WITH YOUR FRIENDS 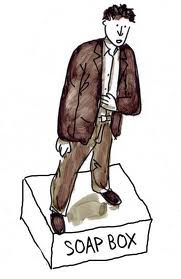