The Soapbox: Ahead of the Curve! 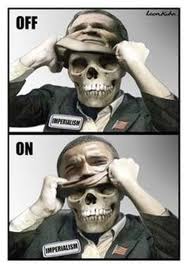 2009 started with so many people hope-notized with the promise of a kindler, gentler emperor of the U.S.A.


Even though I was running against Nancy Pelosi in San Francisco, I never bought the empty-rhetoric and lies of the Obama campaign and felt that it was the responsibility of my independent campaign for Congress to expose the hypocrisy and similarities of the "two" party system.


In the end, about 49,000 voters in California's 8th district believed in me and my message, but over 130,000 still believed that Pelosi and her ilk were the answer to the problems that she and her ilk created. So, jobless, I decided to begin a radio show... Cindy Sheehan's Soapbox.


Three days after Obama was elected, he ordered the first of many of his notorious drone strikes in Northern Pakistan killing dozens of people and I sent the image above to my email contacts with an article denouncing those strikes: instead of support, I was thoroughly attacked and told such things as, "You should give Obama a chance." Really? Like the "chance" he gave those innocent people in Pakistan?


So, the people who were my comrades and partners in "crime" for the horrible years of the Bush presidency became my opposition in the beginning of the horrible years of the Obama presidency--although many of the people who have a working set of brains between their ears have come around full-circle to where I was in 2008 and before: There's very little difference between Frick and Frack at the top of the political dungheap in the U.S. and we have seen the rising of a movement against corporate greed that needs to grow to be logically against the twin parties of greed, war, and corruption.


Please listen to one of our first shows with Matt Gonzalez (Ralph Nader's Candidate for VP in 2008 and Brother Larry Pinkney from the Black Commentator).

Meet the New Boss, Same as the Old Boss


And try not to get fooled again!