There are films that simply should not be made, and this is clearly one of them. The historical context in which a work of mass communication is created and distributed should be taken into account by morally responsible artists. It rarely is. 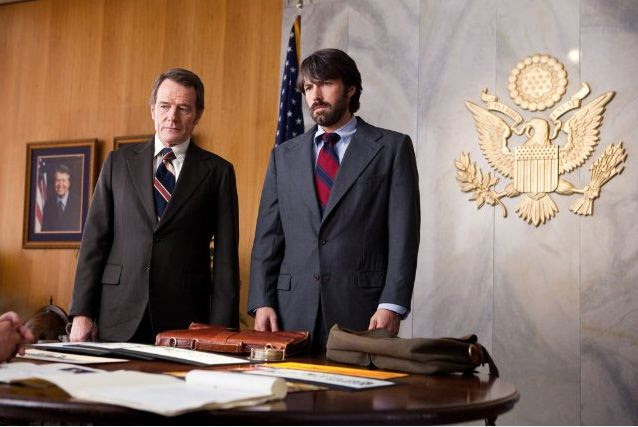 Bryan Cranston. and Affleck (as Mendez).


Ben Affleck’s latest actioner using the Iran hostage crisis as a backdrop may hit the mark as a thriller but misses the target big time by serving as a propaganda vehicle for US war in that region.

Already hailed as one of the year’s best, Argo is a 2012 American political thriller film directed by Ben Affleck (and co-produced by George Clooney, whose fascination with shady intel ops and Middle East intrigue is rather notable).  The film is loosely based on a true story, CIA “exfiltration expert” Tony Mendez’s account of the rescue of six U.S. diplomats from Tehran, Iran at the height of the 1979 “Iran hostage crisis”. The film stars Affleck, Bryan Cranston, Alan Arkin and John Goodman. The film is scheduled for release in the United States on October 12, 2012.

What’s so bloody wrong with this film

Appearing in late 2012, prior to the US presidential election, and in the midst of an all-out propaganda campaign to demonize Iran and take America to war against that long-victimized country (a stealthy dirty war of sabotage and assassination has been waged against Iran for quite some time now by NATO assets and the Mossad, with probably ample support from the Gulf royal mafia), the film can only add fuel–what else–to the flames. This film, under the guise of a thriller, can only exacerbate anti-Iranian feeling in America and elsewhere, and, in passing, perhaps as an unwitting bonus, give the sinister CIA a cuddly wink of approval.  Which is exactly what you’d expect from
nincompoop liberals like Affleck and Clooney.

As film-makers Affleck (just check out The Town, a taut, absorbing heist thriller he helmed in 2010) and Clooney (Good Night, and Good Luck, Syriana) are on solid ground.  Their acting, producing and directorial chops command respect and they are still maturing as artists. Unfortunately the same can’t be said for their political vision, or shall we call it…tact? For what kind of self-indulgent blindness causes otherwise smart individuals like Affleck and Clooney to suddenly become oblivious to the possibly harmful social and political repercussions of their work?  We’re not talking here about being blind to issues like widespread hunger or gay rights violations, which, as card-carrying centrist liberals, both vociferously (and correctly) agitate against. With vehicles like Argo they’re messing with international politics, with the laws of the universe…entering the sphere of grand propaganda, and serving as clueless handmaidens to US foreign policy, especially when they clamor for intervention for “humanitarian reasons” in Libya, Syria, Darfur, etc. (the latest Hollywood fad), thereby providing cover for Washington’s own criminal agenda in precisely those regions.  Clichéd as it sounds, as far as the ruling cliques are concerned, if Hollywood liberals didn’t exist they’d have to be invented.

Argo is bad cinema. Not qua technique, nor acting, nor any of the many other categories by which a complex work like a film is normally judged. Argo is bad because it is a toxic social product. By raising still higher the probability of a horrendous war in the Gulf, by glorifying what Western intelligence agencies actually do in our name, Affleck and Clooney are not doing us any favors, and no amount of entertainment can justify such undertakings. If they really sat down and thought about it perhaps they might finally get it, but I doubt it.  Insulated, privileged creatures like big Hollywood celebs are largely immune to the deeper political truths that define the planet’s current dilemmas. In any case, whatever Argo’s cinematic value, this is a film to avoid. Political obtuseness, artistic vanity, or worse—witting complicity with the forces that are bringing this poor world to a tragic end—are not to be rewarded.

Of course, as usual, I probably am pretty much alone in thinking this way.