Cindy Puts in the Time, are you able to chip in a "Dime?"

"The true foundation of liberty is disobedience, the obedient must be slaves." Henry David Thoreau 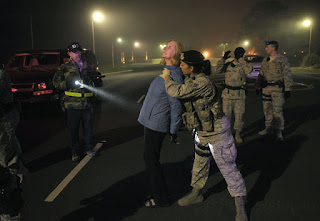 Since my son was killed in Iraq in April of 2004, I have marched a thousand miles for peace and justice; given a thousand speeches around the world; received dozens of awards for my peace work, maintain my weekly podcast; run for federal office (twice); written a thousand articles and six books (the 7th one is on the way); and been arrested about 20 times (I lost count).

Some of the arrests have literally been pieces of cake--like my most recent one up in Bangor, Washington on August 6th, when we were protesting at the nuclear sub base--but some have been horrifying and have taken awhile to recover from. Like the time an NYPD jerk dragged me about 20 feet and dislocated my shoulder and gave me a concussion; or the time I was subjected to subhuman conditions in Waco, Texas--or the time I spent the night in an overcrowded, squalid cell in Sacramento, California. As bad as some of the experiences have been--I feel it is my duty as a good citizen of this planet to confront these bad citizens who create war and wreak economic and environmental havoc on MY PLANET!

Currently, I have two cases pending in Federal Court (for the arrest at Vandenberg--trial next week; and my ongoing persecution by the IRS for my principled act of war-tax resistance), and while the physical toll varies, the financial burden is getting harder.

The cost of traveling to the trials, most likely for more than a day and taking the time off of other productive endeavors (although, I consider civil resistance as a productive endeavor, most of the time), is becoming prohibitive.

I have created a "CHIP IN" campaign if you would like to help me cover these (IL)legal expenses.

Any amount will be much appreciated!