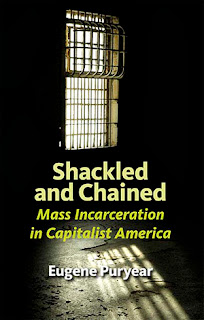 Eugene Puryear is a Washington, D.C.-based activist. In nearly a decade of social justice activism, he has been involved in the anti-imperialist movement, helping to organize most of the largest U.S. demonstrations against the Iraq and Afghanistan wars. Puryear has served as a key organizer around police brutality, prisoners’ rights, and abuses in the U.S. criminal justice system. He was the 2008 Vice Presidential candidate of the Party for Socialism and Liberation, and serves on the editorial board of Liberation newspaper. His writings can be found at www.LiberationNews.org.
Shackled and Chained: Mass Incarceration in Capitalist America by Eugene Puryear
Paperback, 171 pages, $12.95. Sept. 2013, PSL Publications
ISBN: 0-9841220-8-7 • Library of Congress:  2013910887