Doomsday on the Horizon? by Cindy Sheehan 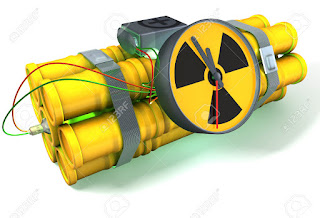 You may logically wonder why this is important to the annual announcement by the Bulletin of Atomic Scientists about the hands of the Doomsday Clock?

Well, Connie spent the last 30 years of her life encamped in Lafayette Park in front of the White House protesting nuclear proliferation and war. Few people have even heard of her, or her encampment, but as I have spent a fair amount of time there protesting, too--I always stopped by to talk to Connie and give her a little cash.

The DC Park Police tried for years to get her to close up her protest, but as she was camped there before anti-camping regulations took place she was "grandmothered" in and her tent had to always be occupied and other activists would giver Connie breaks so she could shower, warm-up, sleep in a bed or whatever. I have long admired her dedication and persistence to this cause and curse the global powers that be that made it necessary. (CLICK FOR CONNIE'S OBITUARY)

According to the Bulletin of Atomic Sciences, the Doomsday clock will remain the closest it has been to midnight since its inception in 1947--"thank you" US president Barack Obama who has pledged to spend 100 billion to one trillion to "modernize" a completely barbaric weapons' system EVEN expanding to "nuclear tipped" bunker buster bombs.

The lunacy of Mutual Assured Destruction (MAD) did not pass after the cold war and as Lawrence Krauss ( chair, Bulletin Board of Sponsors, foundation professor, School of Earth and Space Exploration and Physics departments, and director, Origins Project, Arizona State University) said at today's press conference in Washington DC, it's time to revitalize and increase global protests against atomic weaponry.

Here is a timeline of the Doomsday Clock through the decades:


INFLUENCES AFFECTING THE TIMING IN 2016:

Tensions between the United States and Russia that remain at levels reminiscent of the Cold War, the danger posed by climate change, and nuclear proliferation concerns, including the recent North Korean nuclear test, are the main factors influencing the decision about any adjustment that may be made to the Doomsday Clock. In January 2015, the Doomsday Clock’s minute hand advanced two minutes, moving from five to three minutes before midnight, the closest it has been to catastrophe since the early days of above-ground hydrogen bomb testing.

ABOUT THE BULLETIN OF THE ATOMIC SCIENTISTS

Founded in 1945 by University of Chicago scientists who had helped develop the first atomic weapons in the Manhattan Project, the Bulletin of Atomic Scientists subsequently created the Doomsday Clock in 1947 using the imagery of apocalypse (midnight) and the contemporary idiom of nuclear explosion (countdown to zero), to convey threats to humanity and the planet. The decision to move the minute hand of the Doomsday Clock is made by the Bulletin's Board of Directors in consultation with its Board of Sponsors, which includes 16 Nobel Laureates. The Clock has become a universally recognized indicator of the world's vulnerability to catastrophe from nuclear weapons, climate change, and emerging technologies in the life sciences.
Posted by Cindy Sheehan's Soapbox at 10:57:00 AM