May the Force Awaken by Cindy Sheehan 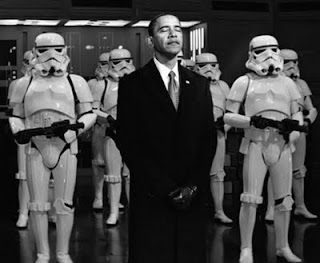 “Listen, I can't get involved. I've got work to do. It's not that I like the Empire; I hate it. But there's nothing I can do about it right now... It's all such a long way from here.”

Psychologist, Robert Jay Lifton, who is a pioneer in the study of what drives otherwise “normal” human beings to commit war crimes calls war: “an atrocity-producing situation.” Atrocities have been committed in every war since the beginning of time, and the sad thing is the barbarity hasn’t decreased. Recently a US soldier tried to justify to me committing atrocities because the "British did it to the Native Americans" in the French-Indian War. This soldier was essentially agreeing with Lifton.

Since war is an atrocity in the first place, war crimes will be committed, period. In many of my speeches soon after Casey was killed, I used to call war “a failure of imagination.” Now I know that’s crap—war is imagined by and for the war machine and gladly perpetrated by its toady elected officials and promoted by its toady media. War is not “failure” in this Empire—war is inevitable.

The UN recently admitted that the world is technically in a World War because of the number of countries involved in the Middle East fighting US/Israel created ISIS (and all of its permutations and uneasy alliances). I am constantly and consistently upset with the Empire’s genocidal foreign policy, but I can’t decide what upsets me more—the genocidal foreign policy or the fact that most of my fellow USAins are sheep who blindly follow (or not follow) the Emperor in the Oval Office depending on whether that person has a (D) or an (R) behind his name. Expressing “him” is not sexist in this case, because it’s always been a “him” so far; however, the US may be getting an Empress soon, but she is as much of an Imperialist warmonger as the next guy and will be no better in terms of peace and social justice.

The inevitability of war would not be possible without toady media or toady politicians or without the Cult of (Storm)Troop Worship. And what about this Cult of Troop Worship? Even the antiwar movement is so careful to not criticize anything The Troops™ do. We are constantly admonished to “hate the war, but love the warrior.” I am sorry, but I don’t even like that word, “warrior.” It implies that our children join the military to commit war crimes, but we all know that most of our children join for education benefits, or health insurance because of all the insidious crimes against the masses, the fact that we have so little options vis a vis education or jobs is perhaps the worst. “Warrior” also implies that we live in a War State—which we do—but the antiwar movement does not have to use the nomenclature of The Empire. Most of us teach our children the difference between right and wrong, but when our young people become The Troops™ they receive a thorough brainwashing and get sent off to murder members of their own class and species who are not their enemies. Our children become hired goons for imperial greed—more like victims of a system that neglects everyone’s essential needs, than heroes.

The Force Tosses and Turns

This past year, with the support of many organizations, (including ROL, USA), Cindy Sheehan’s Soapbox organized one of the only anti-war events in Washington, DC called “Spring Rising: An antiwar intervention.” The turnout and energy were less than spectacular, but I in no way believe that was the fault of the organizers or our very principled demands and activities—the lukewarm energy was mostly due to the fact that most people who would come out in support of antiwar events identify with the Democratic Party and if a Democrat is spiraling the world into war, then it’s probably best for them to just stay asleep until a Republican is doing the same thing.

For those of you living in a cave, there is a new installment of the Star Wars saga in theaters now called, The Force Awakens. I have not seen it, but I know that an Evil Empire cruelly dominates some galactic space-scape and in the series, Luke Skywalker has transformed from the attitude of the Joe USAian to be a badass Jedi Knight because his family was slaughtered. Isn’t it ironic that many of our fellow workers go to these movies to cheer on rebellious behavior, but oppose any effort to end the Empire of the US? Also, how many people identify with the radicalization of Luke Skywalker, but not with the radicalization of Arabs who are literally being driven to oppose the US Stormtroopers in their own countries?

“There are no morals in politics; there is only expedience. A scoundrel may be of use to us just because he is a scoundrel.”
Vladimir Lenin

In my opinion, it would be best to treat the presidential election season as the distraction from relevant organizing that it is and hit the masses that attend these campaign events with a little dose of our “Ray-o-light” Sabers and be relentless in hammering the Empire with our fundamental opposition to Imperialism every chance we get.

May the force (power of the masses) of truth, justice, and rebellion awaken in reality this year and may we continue to be courageously in the thick of it.