My Psychopath is Better than Yours by Anthony Freda

Our only choice may be between a corrupt, mendacious war criminal and a seemingly unhinged egomaniac.

We will have no other options. We are prisoners to the divide-and-conquer duopoly.

Not voting, or voting for a sane candidate from a third party is insane.

Why throw your vote away on a "loser" when you can use it to help elect a despot?

One candidate helped lie us into the Iraq War and build the police state, and the other sprang from her legacy of chaos and failure like a mutated creature spawned in a fallout zone.

Both are intent on imposing their twisted agendas upon the world, backed up by the staggering might of empire, but

"My devil is not as evil as yours"

This is the suicidal, national consensus born of mass narcissism, mutual paranoia and communal hypocrisy posing as pragmatism. 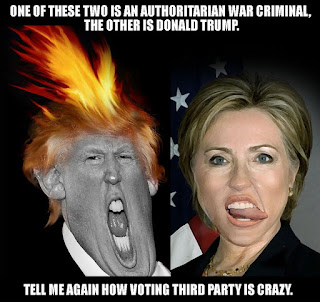